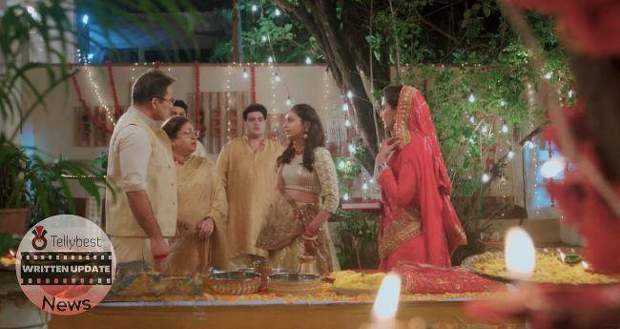 Later Abhimanyu is also dragged to dance with Akshara.

However, Abhimanyu and Akshara watch how their inner souls dance together rejoicing at the proximity.

Meanwhile, Swarna and Manish break each other’s fast while sighting the moon.

After a while, Manish tells Swarna that he is going to Jaipur to meet Akshara.

Suhasini tries to stop Manish but he is adamant.

Just then Aarohi comes home and tells Manish that he does not need to go to Jaipur to meet Akshara.

Meanwhile, Abhimanyu and Akshara are feeling fraudulent at pretending to be happy and lying in front of God.

However, they perform the Karwachauth ritual while Manjari goes inside suddenly feeling unwell.

Just then Manish comes to take Akshara back home, telling her that Suhasini has told him everything.

Both Abimanyu and Akshara look shocked to see Manish standing at the door with Kairav and Akhilesh.

Akshara apologises to Manish for lying to him but requests him to let her stay here a while longer as Manjari is still unwell and if she goes now then all their efforts will go in vain.

However, Manish tells Akshara that they will not discuss the matter here and holds her hand to take her back.

Just then, Manjari returns to the courtyard and is surprised to see Manish standing there holding Akshara’s hand while Akshara stands with tears in her eyes.

Everyone is shocked to see Manjari while Manjari looks curiously at Manish and Akshara asking them what is wrong with them.

Mahima comes forward and tells Manjari that time has come to tell Manjari the whole truth.

Seeing others stand in abject silence, Mahima tells Manjari that Abhimanyu and Akshara are only pretending to be together but in reality, their relationship is nothing but a hoax.

Manjari recalls all the past events after her return from the hospital and understood what was wrong in the picture.

Meanwhile, Manish tells Akshara to return home as there is nothing left to keep her here.

As Manish was leaving, Manjari stops him and ask for five minutes to talk to Abhimanyu and Akshara.

Manish tells Akshara to come out after five minutes.

In the meantime, Suhasini scolds Aarohi for telling Manish about Akshara.

Swarna is shocked to hear about Suhasini knowing the truth and tells her that Akshara should not have done it like this.

Later, Manjari asks Abhimanyu and Akshara to tell the truth about their relationship while both admit that they are taking divorce from each other.

Manjari looks disappointed in them and gets up from the wheelchair.

© Copyright tellybest.com, 2022, 2023. All Rights Reserved. Unauthorized use and/or duplication of any material from tellybest.com without written permission is strictly prohibited.
Cached Saved on: Monday 21st of November 2022 07:06:24 AMCached Disp on: Thursday 1st of December 2022 02:22:33 AM