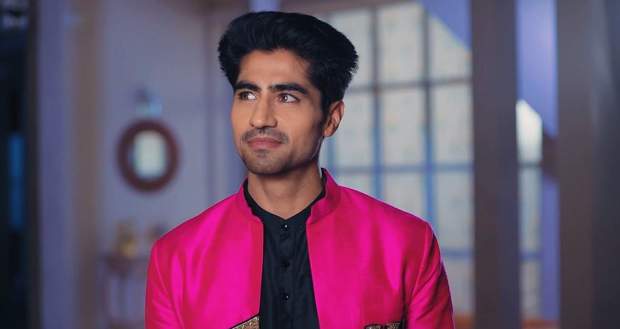 Today's Yeh Rishta Kya Kehlata Hai (YRKKH) 19th April 2022 episode starts with Akshara walking toward Abhimanyu while looking scared and asking Abhimanyu why has he called her there.

Being reminded of the accident, Akshara tells him that she was scared and that's why she didn't tell him.

Abhimanyu tells Akshara that she was there with him when he was searching for Manjari and afterwards also yet she told him about her accident, neither before nor after.

On the other hand, Mahima is amazed that no fireworks happened at the ‘Sangeet’ ceremony and wonders about failing in her planning.

Mahima says that she will do everything in her power to break Akshara’s and Abhimanyu's wedding. However, she finds Manjari standing behind her.

Meanwhile, Akshara tells Abhimanyu that she has tried many times but Abhimanyu cuts her in between and angrily tells her that she had plenty of chances to tell him but she did not tell him.

Akshara has no clue why is Abhimanyu acting so strangely today when she had already told him the truth.

In the meantime, Manjari asks Mahima who has she been talking to while Mahima sighs with relief that Manjari hasn't overheard anything.

Later, Akshara tells Abhimanyu that Aarohi had been driving the car which makes Abhimanyu conclude that she did not tell him, only to save Aarohi.

However, Akshara tells him that she has told him on the day of the music department’s inauguration and later he told her that he did not want to hear anything about the accident.

Abhimanyu tells her that he has no knowledge of this and it was Manjari’s wish that she did not want him to investigate the accident.

He also tells her that he will punish Aarohi badly for what she did to Manjari.

However, Akshara tries to stop him by hugging him tightly and asking him to calm down so that he can think clearly.

Abhimanyu tells her that their relationship has become hollow because of Akshara’s lies and only the surface looks good now.

Meanwhile, Abhimanyu tells Akshara if only she had trusted him then they will not be having this discussion today.

Akshara tries to stop Abhimanyu from leaving him and begs him to not punish her for what she has not done but Abhimanyu keeps walking in the other direction while wiping his tears whereas Akshara is left behind crying.

Akshara pulls herself up and sits in the car where she received a message from Neil about some urgent matter and misunderstands it thinking Abhimanyu has broken off their marriage.