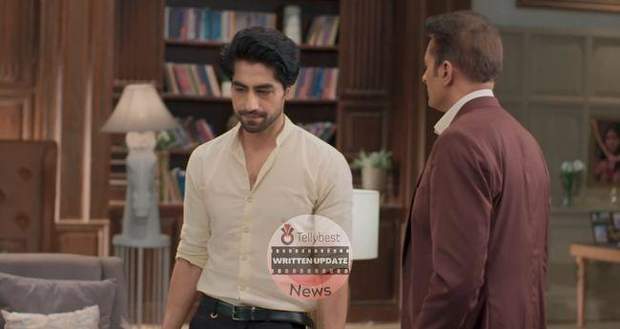 Today's Yeh Rishta Kya Kehlata Hai (YRKKH) 19th August 2022 episode starts with Mahima emotively telling Abhimanyu that Akshara will leave them and him for the sake of her brother.

Akshara tells her that she has never done anything to deserve these accusations and leaves.

Abhimanyu follows her and tells her that he completely trusts her but asks her to not talk about her brother until the truth is revealed.

Meanwhile, Manjari tells Mahima that Akshara has not done anything to deserve these allegations and she is equally worried.

After a while, Akshara tells Abhimanyu to agree to the surgery as it is everyone's wish and even Anisha prayed for him to get better.

At the Goenka house, Akhilesh and Manish are worrying about Kairav’s bail while Suhasini tells them that she had a very bad dream in the morning.

Meanwhile, Kairav is feeling anxious and restless and keeps on repeating that he has not killed Anisha.

On the other hand, Mahima tells Manjari that Akshara is taking sides and do not love them over her family and she is worried about Abhimanyu who loves her unconditionally but Akshara is not worthy of this love and trust.

However, Manjari defends Akshara to Mahima and asks her to give Kairav the benefit of doubt until anything is proven.

In the meantime, sitting on the stairs, Akshara sings to ease her worries while Abhimanyu feels her pain.

Akshara prays to God to ease some of the problems of the family if not all either to prove Kairav innocent or convince Abhimanyu for the surgery or ease the family’s tension.

The next morning, Akshara has a pleasant dream about Abhimanyu being convinced to get the surgery done.

However, waking up, Akshara is disheartened and decides to ask his family to talk to him and convince him.

Meanwhile, Abhimanyu is also having a pleasant dream about getting back to himself and wakes up thinking about his surgery.

After a while, Akshara tells the family that Abhimanyu needs to get his surgery done today and asks them to convince him before it is too late.

Later, Harshvardhan comes to Abhimanyu to convince him of the surgery and tells him that working in a hospital makes the person realistic that they have never allowed his personal life to affect his professional life and it is his duty as a doctor to think about his patients.

Citing the example of Manjari, Harshvardhan tells Abhimanyu to not let this opportunity of surgery go from his hand and regret it forever.

© Copyright tellybest.com, 2020, 2021. All Rights Reserved. Unauthorized use and/or duplication of any material from tellybest.com without written permission is strictly prohibited.
Cached Saved on: Saturday 1st of October 2022 10:28:42 PM