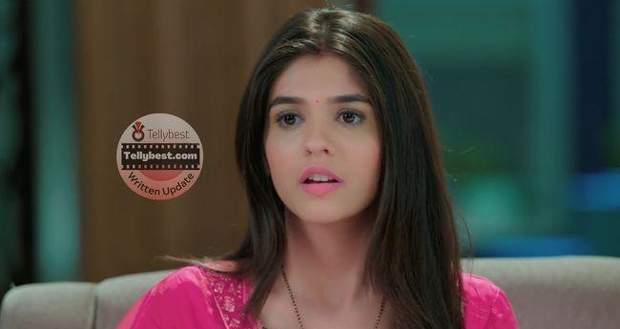 At the same time, Harshvardhan watches Abhi and Neil dancing and laughing with tears in his eyes.

In Akshara’s room, Akshara is sitting on the bed and Abhi runs to her side when he sees her panting in anxiety and asks her if she is okay or if he should call the doctor.

Akshu does not answer his question but says that Arohi is not pregnant and he gets shocked.

He recalls Neil’s words and his heart breaks knowing that Neil’s heart will break with this news.

Akshara starts to stress but Abhi consoles her and assures her that he will handle everything.

He makes Akshara promise that she will keep herself out of this problem and doesn’t stress at all.

Later, Abhi is sitting on the edge of the swimming pool dipping his feet in the water in anxiety.

At the same time, Neil joins him and shows him a list of baby girl names and asks him to choose one.

Meanwhile, Manjari calls Akshara and Arohi to choose the wool colour for the baby's socks.

Neil takes the opportunity and runs to Manjari but Abhi stops him and asks if they can meet outside for some time.

However, Neil denies it as he needs to take care of the babies and Arohi.

Later, in the living room, Manjari and Neil are selecting the wool while Akshara and Arohi descend the stairs.

Akshara cries seeing him being so involved with babies.

When Arohi suggests Neil to choose nude colours he broadly says he wants his children to be colourful.

Afterwards, Arohi enters the room with a wool basket and holds her head as Neil is too excited for the babies.

Akshara enters the room and slams the wool basket on the floor and confronts Arohi for lying about her pregnancy.

Arohi gets shocked as Akshu knows the truth and lies that it was a false alarm.

However, Akshu reminds her she had a blood test then why she didn’t tell everyone the truth.

Arohi cries and screams at Akshara that for the first time in her life she got accepted by Birla and Goenka's house.

She didn’t want to let Akshara hoard all the attention as she was ahead of her for the first time.

Akshara scolds Arohi for her foolish actions and advises her to not compare herself to others.

Arohi justifies her actions and requests Akshara to not say anything to Neil because she will tell him herself.

However, Akshara urges Arohi to tell him the truth now that she is not pregnant because he deserves to know the truth.

At the same time, a toy drops on the floor and Neil is standing at the gate shocked.

Arohi and Akshara get shocked to see Neil and Abhimanyu.

Neil picks up the toy and glares at Arohi and slams the toy on the floor.

He kicks the table, slams the items of the vanity on the floor and tears the bedsheet in frustration.

Neil goes out of the room and Arohi runs after him while Abhimanyu walks to Akshara disappointed that she intervened even after she promised him.

In the living room, Neil refuses to listen to Arohi and asks her to get lost.

Abhi and Akshara try to calm Neil down but he states he did not do anything with her.

Arohi begs Neil with folded hands but he tells her to get lost from her eyes.

Abhi holds Neil who is shaking in anger and hugs him.

Neil states he needs to be alone and think about how to deal with family as he was the one who brought Arohi home.

© Copyright tellybest.com, 2022, 2023. All Rights Reserved. Unauthorized use and/or duplication of any material from tellybest.com without written permission is strictly prohibited.
Cached Saved on: Wednesday 25th of January 2023 08:59:20 AMCached Disp on: Wednesday 1st of February 2023 09:17:15 PM