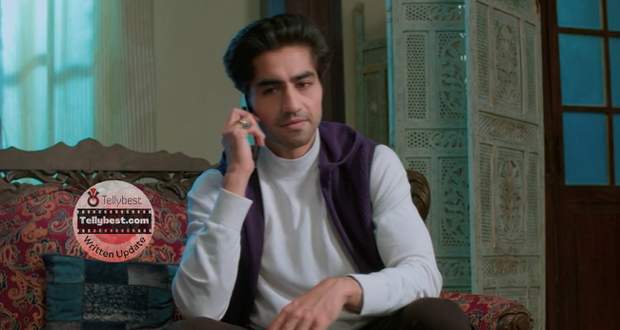 Just then Abheer hears someone at the door and assumes him to be Abhimanyu.

Both Abhinav and Abheer rush to get the balloon to welcome him but are disappointed when a total stranger asks for directions.

Later, they go to blow more balloons when Abhinav gets an apology call from Abhimanyu who has to assist in surgery on a video call and will not be able to come.

Both Akshara and Abheer are disappointed and Abheer counts the efforts they took including dressing up and looking handsome.

Akshara tells Abhinav to be prepared to eat the same food for three days because she will not let it go to waste.

Seeing their disappointed faces, Abhinav suggests having a party of their own and begins to dance to the music.

While dancing, he tells Akshara that Abhimanyu is a heart surgeon which stops Akshara in her tracks and memories of Abhimanyu bombards her.

Abhinav is about to tell Akshara Abhimanyu’s name when the power goes off again and Abheer drags Akshara to dance.

While dancing, Akshara reaches the door and freezes seeing Abhimanyu.

Abhimanyu is equally shocked to see her at the other end of the door and time stops for them.

There is a sea of emotions in their eyes and a tear run down Abhimanyu’s eyes making him turn away.

Akshara also comes out of the trans while Abhinav spots Abhimanyu at the door and introduces Akshara and Abhimanyu to each other.

As the power is back too, Abhinav calls Abhimanyu 'Noor' (light) who brought back the light in the house.

Abhimanyu tries to look happy while dying from the inside while Akshara is still standing at the door trying to come to terms with Abhimanyu's presence in her house.

Abhinav asks Abhimanyu to sit while Akshara goes inside the kitchen and cries to see Abhimanyu back in her life.

Abhimanyu looks around the house and stares at Akshara’s picture in the photo frame while wondering why his fate has brought him here.

Abhimanyu sits with a thud and tries to compose himself recalling the fateful day of divorce.

After a while, Abhinav tells Abhimanyu to consider this his home while calling Akshara to come out.

He calls Akshara shy for meeting him the first time as people talk when they know each other from before.

However, Abhimanyu tells him that sometimes there is nothing left to say.

Abhinav and Abheer go to get something from the room while Akshara comes with a glass of water and some sweets.

Abhimanyu looks at Akshara recalling a very intimate romantic moment while Akshara also looks at him thinking of the past.

There is a wealth of pain and complaints in their eyes.

Akshara draws the line of strangeness by telling Abhimanyu that in their home guests eat something sweet with water.

After a while, Abhinav and Abheer come with a welcoming card while Abhinav shows the trophy to Abhimanyu saying Abheer could win it with his help only.

Later, Akshara apologises to Abhimanyu for Abheer’s mistake while Abhimanyu tells her that he does not keep track of past mistakes.

However, Akshara tells him that it is important to remember the past and those who forget, suffer the same fate.

Later, Abhinav makes small talk with Abhimanyu while Akshara observes Abheer’s hand in Abhimanyu’s and looks at the irony of the father meeting the son for the first time.

Akshara goes to lay the table while Abhinav asks Abhimanyu to wash his hands.

Abhimanyu looks longingly at the door while Abheer drags him towards the wash basin.

Later, Abheer watches Abhimanyu washing his hands while Akshara sets the table and thinks that she is tolerating Abhimanyu’s presence because of Abhinav as she does not want to embarrass him.

© Copyright tellybest.com, 2022, 2023. All Rights Reserved. Unauthorized use and/or duplication of any material from tellybest.com without written permission is strictly prohibited.
Cached Saved on: Wednesday 25th of January 2023 08:56:39 AMCached Disp on: Wednesday 1st of February 2023 05:44:38 PM