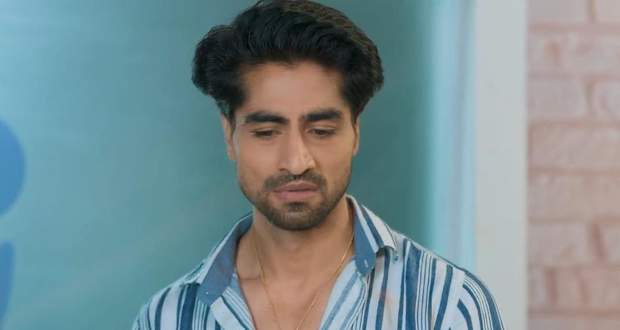 At the same time, the light goes out and in that darkness, she kisses him saying I love you and Abhimanyu returns the favour.

Just then light comes back and all go to eat while Aarohi watches their dancing video and feels angry.

After a while, Abhimanyu and Akshara come to their room where Akshara just wants to be with him.

Meanwhile, Anand gets a message from the specialist doctor who is coming to meet Abhimanyu which worries him.

Akshara and Abhimanyu are spending time with each other feeling their togetherness.

The next morning, Manjari and Abhimanyu observes Anand being worried while Neil tells them that it is because of the audit which was Harshvardhan's forte.

Abhimanyu recalls the recommendation letter of Harshvardhan that he has yet to sign.

Meanwhile, Aarohi is waiting for Rudra’s reply and hopes that his father's connections might return her license.

In the meantime, Akshara is preparing for the audition and checks her voice when Abhimanyu comes in complimenting Akshara and offering to help her.

Abhimanyu gives pep talks to Akshara and shares his experience of his first surgery.

After a while, Akshara walks on Harshvardhan’s letter of recommendation and gives it to Abhimanyu who tears it and goes out.

In the meantime, Aarohi gets a message from Rudra and becomes excited.

Later, Aarohi resolves to not let Akshara win or become a singing sensation which Swarna overhears.

Elsewhere, Abhimanyu comes to Manjari to confer with her about some decisions whereas Akshara stands outside and approves of Abhimanyu's decision.

Meanwhile, Swarna comes to Aarohi’s room but she tells her to go away.

Kairav also comes to reason with her whereas Aarohi gets more agitated and leaves the room saying they will never understand her and will always favour Akshara over her.

After a while, Anand is getting ready to leave when Neil asks about Abhimanyu’s surgeries being cancelled.

Abhimanyu and Manjari come to Anand telling him to reinstall Harshvardhan at his position which relieves him.

Neil praises Manjari for being strong enough to forgive Harshvardhan.

Later, Abhimanyu is ready to leave with Akshara when Anand calls him to the hospital immediately to meet with the specialist who is waiting for him.

© Copyright tellybest.com, 2022, 2023. All Rights Reserved. Unauthorized use and/or duplication of any material from tellybest.com without written permission is strictly prohibited.
Cached Saved on: Wednesday 25th of January 2023 02:55:58 PMCached Disp on: Thursday 9th of February 2023 08:45:45 AM