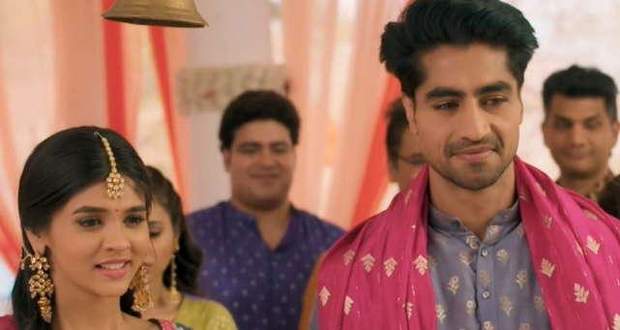 Hearing the sound of preparations going on in the background, Abhimanyu assumes that Manjari has reached home and is perfectly fine.

However, his anxiety doesn’t calm down, as a result of which his blood pressure rises up.

Meanwhile, Arohi wonders if something big had really hit her car as Akshara says, or if it was a small accident.

Akshara schools Arohi for her reckless behavior and suggests telling the truth to Kairav.

Arohi gets scared at the thought of Kairav or any person in the family knowing about the accident or the reason behind it.

Therefore, despite Akshara’s insistence, Arohi refuses to disclose today’s series of events to anyone.

Furthermore, the Goenkas discuss the Holi party. Akshara receives Abhimanyu’s message about Manjari being at home only.

Meanwhile, Abhimanyu returns home calling for Manjari restlessly. He gets a shocker when Neil informs him that she has not returned since they had dropped her at the temple.

Abhimanyu grows worried while Harshvardhan nonchalantly says that Manjari must have been gossiping with the ladies in the temple.

The statement makes Abhimanyu angrier and he leaves to look for Manjari.

On the other hand, Akshara is not able to get the accident out of her head as the flashes come again and again.

At the same time, Abhimanyu calls Akshara informing her about Manjari which leaves her shocked as well along with the family.

Meanwhile, Abhimanyu receives a call from the hospital about a dead body being found.

Terrified, Abhimanyu runs to the hospital’s mortuary where he sees the dead body.

The other family members along with Akshara get scared for a moment seeing Abhimanyu’s horrified expressions after he comes out of the mortuary, however, they sigh in relief when get to know that it is not Manjari.

Thereafter, Abhimanyu and Akshara leave the hospital to look for Manjari with Neil and Parth following them.