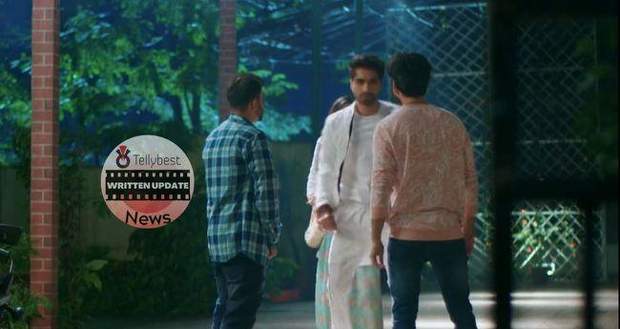 Abhimanyu promises her that after Akshara’s time will get over he will do everything she wants.

On the other hand, Akshara is assuring Kairav that she will get him free and place him in a safe place.

Vansh offers to help Manish look into Aarohi’s phone and looks shocked to see something but does not tell Manish.

Just then, Suhasini brings Kachori and tells Manish that she can feel Kairav and Akshara close and that soon they will get back.

At the same time, Kairav's voice shocks everyone and they become happy to see him in front of him.

Akshara is pleased to see Kairav meeting his family while Manish asks about Akshara.

Meanwhile, Kairav tells them that Akshara will give them their answers but for now, he can only tell them that she is safe.

After a while, Akshara is accosted by loafers on the road who wants her phone back.

Before Akshara could do anything, Abhimanyu comes to her rescue.

However, Akshara uses her pepper spray on the loafers and makes them run away.

She tells Abhimanyu that she has started carrying it since he was not there to protect her.

After a while, a loud thunder surprises them and they get tangled with each other and fall to the floor.

Both Akshara and Abhimanyu remember similar past moments.

Later, Akshara gets a call from Dr Kunal and rushes back to the hotel telling Abhimanyu to wait for her.

Meanwhile, Dr Kunal is beating at Akshara’s door and suspects her of leaving before the concert.

Later, he asks the hotel staff to open the door with the Master key.

Seeing the room empty, Dr Kunal gets angry and is about to leave when he hears Akshara’s voice coming from the other side of the bed.

Akshara is lying on the floor with headphones on.

Dr Kunal wakes up Akshara while Akshara pretends to be surprised and berates Dr Kunal for coming into her room without her permission.

Meanwhile, Abhimanyu comes back from his jogging and looks at the time.

Just then, Neil comes to console him and tells him that time that he understands his feelings about time that is passing very slowly.

On the other hand, Neil is counselling Abhimanyu to go to meet Akshara with an open mind and carefully listens to her before making any decisions.

© Copyright tellybest.com, 2020, 2021. All Rights Reserved. Unauthorized use and/or duplication of any material from tellybest.com without written permission is strictly prohibited.
Cached Saved on: Saturday 1st of October 2022 09:01:15 PMCached Disp on: Monday 3rd of October 2022 07:29:46 PM