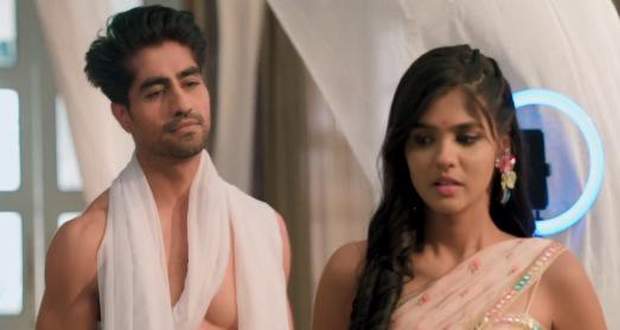 However, Abhimanyu asked Akshara to say whatever she like.

Meanwhile, Aarohi is scared about Akshara telling everything to Abhimanyu.

Later, Abhimanyu asks Akshara which accident is she talking about but Akshara distracts him by asking him to tie her hair.

Aarohi is planning to go check on Akshara when Neil stops her and asks her about the accident that Akshara was talking about.

After some time, Abhimanyu tells Kairav to take care of Akshara, while the Goenka thanks Birlas for their hospitality.

Aarohi tells him that Akshara has been relating Manjari’s accident with Seerat Mama’s accident and if he doesn't believe her then he can ask Akshara after she wakes up.

After a while, Abhimanyu receives a call from the investigator.

Later, Manjari asks Abhimanyu about the investigator and asks him to stop stressing about this accident and focus on his marriage preparations.

After being emotionally blackmailed by Manjari, Abhimanyu agrees to give up the investigation.

At the Goenka house, Kairav settles Akshara on her bed and asks Aarohi to look after her.

While Abhimanyu is feeding Manjari ‘Khichdi’, she tells him to be a good husband to Akshara and always forgive her even if she is wrong and always support her.

In the meantime, Akshara in her unconscious state talks about telling Abhimanyu about the accident.

Getting scared about Akshara's confession, Aarohi plans to do something about Akshara and her obsession with this accident.