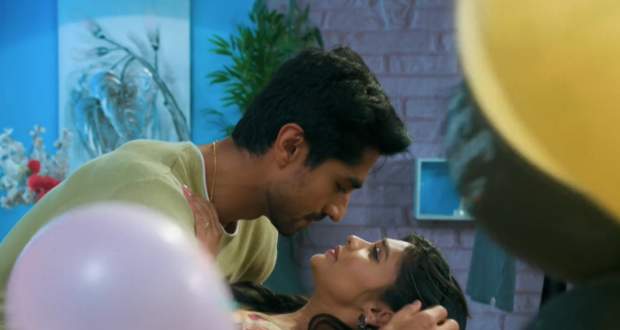 Today's Yeh Rishta Kya Kehlata Hai (YRKKH) 1 December 2021 episode starts with Abhimanyu almost finding Akshara as she continues to hide from him. Neil somehow manages to hold back Abhimanyu while Akshara runs away from the party.

On the other hand, Harshvardhan scolds Manjari for singing and dancing in public making her sad. She apologizes and Harshvandhan leaves in anger. The other family members praise her for her talent.

Meanwhile, Abhimanyu goes to check the CCTV footage but the guard informs him that the CCTV cameras are not working from the morning.

Later, Akshara was arranging balloons and gifts in Abhimanyu’s room when Abhimanyu enters. Akshara quickly hides behind the balloons.

On hearing this, Ruby threatens Abhimanyu telling him her dad is the health minister and she will destroy his career. Abhimanyu challenges her to do as she wishes.

As Ruby leaves the room, the balloons fly away making Abhimanyu discover Akshara. A balloon bursts making Akshara afraid and she falls on Abhimanyu.

After that, Neil comes in telling Akshara to leave but finds Abhimanyu there. Neil explains that Akshara had come to help them with the birthday party.