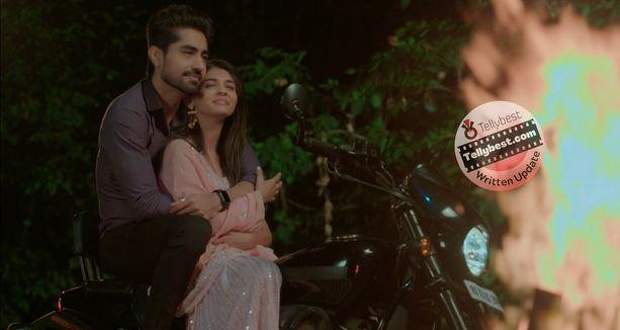 Akshu enters the Goenka house and sees Manish sleeping on the couch.

Manish sees Akshara with sleepy eyes and gets shocked to see her so late at night.

Akshara refuses to tell Manish the reason for her abrupt arrival but he persuades her to tell the truth.

Manish hugs Akshara when she tells him something is eating Abhimanyu from the inside and he is not telling anyone the truth.

In the Birla house, Abhi slams the bike keys on the table and glares at Arohi.

When Abhimanyu turns to tell Arohi she is the reason Akshara went, Manjari is also standing there.

Seeing Manjari, Arohi smirks and Abhimanyu calms his anger while Manjari asks where Akshara is.

Abhimanyu lies that Manish wanted to meet Akshara but Arohi contradicts his statement by saying that Manish slept early.

He leaves his room furiously while Arohi instigates Manjari against Akshara.

She tells Manjari that Akshara has gone to Goenka's house because Abhi is throwing them a reception party.

Later, Arohi demands Manish’s presence in the reception and Abhimanyu looks at her shocked.

The next morning, Akshara is working in the kitchen but she is reminiscing about all the past events.

At the same time, Manjari video calls Akshara requesting her to come back but Akshara says something is not right.

Manjari refuses to persuade Akshara to come back and cuts the call.

In Neil’s room, Arohi bad-mouths Akshara in front of Neil hoping he will take her side.

However, Neil assures Arohi that Akshara will come to their reception party.

On the other hand, the doctor advises Abhimanyu to refrain Akshara from stressing about anything as it can affect her health more.

Abhimanyu curses Arohi and Manjari puts her hand on his shoulder seeing him tensed.

He hugs Manjari with eyes full of tears and lies to her reluctantly.

Meanwhile, Manjari advises Abhimanyu to focus on their personal life and start a family.

Abhimanyu lies and walks away while Mahima taunts Manjari that Akshara’s absence does not look good when Abhimanyu is preparing everything.

Later, Neil apologizes to Abhimanyu for his previous words and assures him that he will talk to Akshara.

Afterwards, in Goenka's house, Akshara gets shocked to see Abhimanyu in the house but he straight away goes to Manish.

He sits on his knees joining his palms and requests Manish to forgive Arohi.

Everyone gets shocked while Akshara questions Abhimnayu’s actions.

Abhi ignores her and Manish helps him up and agrees to forgive Arohi at his request.

When Abhimanyu is going out of the house, Akshara follows him.

Abhimanyu slams his hand on the car bumper and gets a call from Arohi.

He tells Arohi to stop blackmailing him in Akshara’s name and dare not tell the truth to Akshara at any cost and slams the phone on the road.

Akshara gets shocked and realizes that Arohi was behind everything.