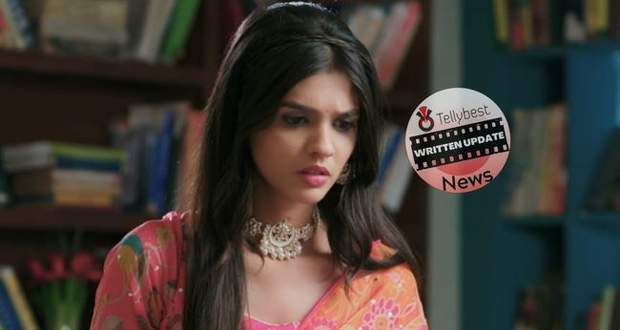 In the meantime, Swarna is talking about Aarohi and Neil’s sangeet ceremony and prays for things for a hassle-free Sangeet.

Elsewhere, Shefali tells Manjari about Mahima being locked in her room while Manjari is not concerned with Mahima and hopes that she realises her mistake soon.

After a while, Manjari also shares her desire for Abhimanyu and Akshara to get back together as they can only be happy with each other.

On the other hand, Akshara is oiling her hair and thinking about Abhimanyu’s confession and Suhasini’s advice.

Akshara is not able to make a decision and she feels something is hindering her from making a decision.

Elsewhere, Abhimanyu is preparing to meet Akshara and making room for her things in his room.

Akshara is worried about meeting Abhimanyu in Sangeet and is not able to understand what she should do as far as their relationship is concerned.

The next morning, Abhimanyu comes down thinking of Akshara and resolves to win Akshara over.

Meanwhile, Manjari and others also join him while Mahima stays behind.

On the other hand, Aarohi is talking to Atul about the papers and getting Neil’s signature on the wedding day.

Just then Suhasini calls Aarohi and asks her about Atul.

Aarohi lies about Atul and hides the paper from Suhasini which alerts Akshara of something fishy going on in Aarohi’s mind.

Just then Akshara sees Abhimanyu and Birlas at the door and hides behind the curtain to avoid him.

Later, the Goenakas welcome the Birlas.

Meanwhile, Akshara is not able to understand her feelings which is stopping her from going to Abhimanyu.

Abhimanyu's words ring in her ears and Akshara tries to control herself while getting ready.

As Akshara counsels herself to get a hold of her emotions, she sees Abhimanyu in the mirror and turns around with a safety pin between her lips.

Akshara remembers a romantic moment from the past when she has taken the safety pin from Abhimanyu’s lips from her own.

Abhimanyu covers the distance between him and Akshara and bends down to recreate the moment but Akshara shies away from him.

However, Abhimanyu takes the pin from Akshara's lips and uses her dupatta to tie himself to her.

He tells her that the safety pin of their relationship was lost and separated them but now that they have found them they should not miss the opportunity for a second chance.

Akshara looks nervous at Abhimanyu's nearness and is about to go down when Abhimanyu stops him and reminds her of the earrings that she has forgotten to wear.

As Akshara goes to wear them, Abhimanyu hands them to her and puts a black dot to ward off the evil eye.

Akshara feels her heartbeat going out of control at Abhimanyu's silent display of love and tells him that safety pins are not enough.

Meanwhile, Abhimanyu comes to request Manish to come to the Sangeet and narrates to him a story of his past and the regrets that he still harbours because of his anger.

© Copyright tellybest.com, 2022, 2023. All Rights Reserved. Unauthorized use and/or duplication of any material from tellybest.com without written permission is strictly prohibited.
Cached Saved on: Monday 21st of November 2022 02:23:18 AMCached Disp on: Friday 9th of December 2022 04:30:02 AM