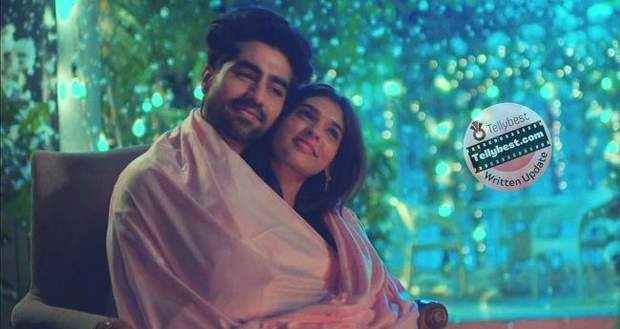 Meanwhile, Manjari comes after shopping for things with a lot of happiness radiating through her.

She sees Akshara and Abhimanyu standing near the entrance and says it is good Akshara didn't accompany her since the market was so crowded.

Manjari then sees Aarohi with a suitcase, coming downstairs and rushes toward her, saying she shouldn't pick heavy stuff during her pregnancy.

Aarohi's eyes look pained as she tells Manjari she is just going to the Goenka House as she misses everyone.

Manjari tells her that she need not go alone as Neil will leave her.

However, Aarohi jumps from her spot, hearing Neil will leave her, and immediately says he cannot.

Manjari laughs lightly and explains that she meant Neil will drop her off but Arohi lies that Neil has gone to the hospital for some work.

Abhimanyu volunteers to drop Arohi and she asks him to stop the car midway.

She goes out of the car and cries, calling on Neil's number but Abhimanyu shouts at her to quit her drama.

Stating that he is tired of her tactics, Abhimanyu reminds Arohi that he had asked her previously if she was pregnant or not but she still lied and broke Neil's heart.

Without wasting any time, Abhimanyu barges inside the car and honks to indicate to Arohi to sit fast.

He then drops her off at the Goenka House where Swarna notices her sad expression.

She asks Abhimanyu if everything is alright but Abhimanyu quickly excuses himself to go back as Akshu might be waiting for him.

Abhimanyu upon reaching Birla House has a conversation with Akshu in the garden and tells her she didn't need to say anything to Aarohi.

Akshara closes her eyes in regret when suddenly, Manjari calls both of them inside.

Happily, Manjari shows an invitation card for Neil's birthday and says she wants to make it the best birthday for him.

Akshara then asks Manjari what if he has some plans with his friends but Manjari laughs it off, stating after he becomes a father, he won't have time for his friends.

At Goenka House, Arohi sends voice messages to Neil, urging him to talk to her once, and applies head balm on her forehead to relieve the headache.

Same way, Akshara prepares a lemonade for herself and Abhimanyu notices how stress is affecting her.

In Aarohi's room, Manish walks in and asks if she is crying.

Arohi pretends to be happy and says she will go have Agra Petha since she is craving it and leaves the room.

On the other hand, Akshara keeps getting calls from the music directors and gets irritated.

She tells the person on the call that she can't do the events since there are some personal issues but it is Manish on the other end.

Manish questions Akshara what are personal issues she is talking about and also about Aarohi who is behaving so weirdly.

Akshu lies, saying Aarohi missed all of them and excuses herself from the call.

All the Birla family members tell Neil that they have organized a big celebration for his birthday and Neil stiffens.

Akshu silences everyone and says that they shouldn't take Neil's viva, laughingly.

Shefali then asks Manjari where is Aarohi and Manjari replies she has gone to meet Swarna.

Neil tries to pass a smile to everyone while Abhimanyu and Akshara stress about him.

He then asks Akshu not to trouble herself so much due to Arohi & Neil.

Meanwhile, NGO kids come to Birla House and urge Akshara to sing as it is very important.

Akshara looks at Abhimanyu, asking what to do when suddenly, Manjari comes and advises Akshu not to perform for the safety of the babies.

However, Abhimanyu tells Manjari that Akshara should perform, since internally, Abhi is aware that music makes Akshara happy.

© Copyright tellybest.com, 2022, 2023. All Rights Reserved. Unauthorized use and/or duplication of any material from tellybest.com without written permission is strictly prohibited.
Cached Saved on: Wednesday 25th of January 2023 09:23:13 AMCached Disp on: Tuesday 31st of January 2023 06:49:34 PM