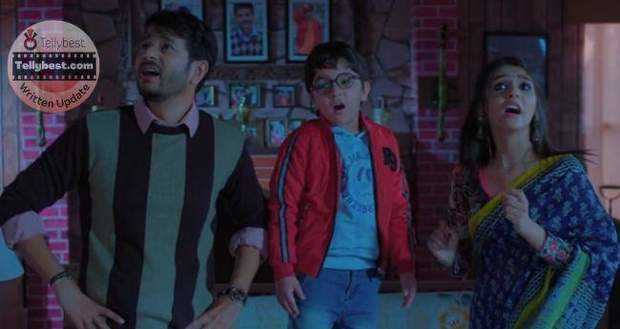 Today's Yeh Rishta Kya Kehlata Hai (YRKKH) 20th January 2023 episode starts with Abheer commenting Abhimanyu on his overuse of soap and tells him that he has come at his study time and he might come second because of his interruption.

Abhimanyu asks him if he should leave after which Abheer takes as an offence and counts the trouble that he and her mother has gone through to prepare a meal for him.

Seeing Akshara play family to Abheer and Abhinav, Abhimanyu looks longingly at the door while tapping his feet restlessly.

Abhimanyu gets lost in the taste of the food while Abhinav praises Akshara’s magical cooking.

Abhimanyu tells him that he has tasted the food before but clarifies about eating his tiffin the other day.

Abhimanyu tells Abhinav about the indescribable pain of a child whose father dies before her birth.

Abhinav tells him that if life takes from one hand then fills the other hand with something else.

However, Abhimanyu tells him in a pained voice that some hands are meant to be empty all their life.

Abhinav can not understand Abhimanyu’s deep meaning and makes light of it offering him Kheer.

Later, Abhimanyu goes to wash his hands and locks himself in a bathroom feeling the panic attack building up and tries to control himself to not give away the mental torture that he is feeling.

Later, Abhimanyu takes their leave while Abhinav asks him if he has eaten properly.

He also gives him the gift hamper of jam.

Just then Abhimanyu recalls the envelope of money that he has brought to pay the overdue.

Abhimanyu leaves in a hurry as if his staying will burn him alive.

Later, Abhimanyu cries in pain thinking about Akshara being well-adjusted in her new life.

Meanwhile, Akshara also is left at that moment thinking about how her past came back knocking at her door but left after meeting her present.

Later, Abhimanyu falls flat on his bed feeling his legs give away.

He also asks her if she agrees now that his Dilwale Bhaiji is a very kind and good person.

Later, he tells Akshara to put the money in Abheer's fees box.

After a while, Abhinav asks her if there is something still troubling her about Abhimanyu.

He also comments on her being uncomfortable during the dinner and still looking out of sorts.

Akshara tries to tell him about Abhimanyu but cannot gather the courage to speak and tell Abhinav that Abhimanyu has overpaid.

Abhinav smiles at Abhimanyu at being weak in maths and tells Akshara to not worry as he will return what belongs to Abhimanyu with utter respect as he is content in what he has and does not require to pawn off Abhimanyu.

Abhinav also thanks Akshara for taking care of his guest.

Seeing  Akshara’s worried face, Abhinav asks her if there is anything else left to say about Abhimanyu that is worrying her.

Later, he takes the money from Akshara’s hand and counts the extra money out of it to be returned later and he keeps the rest in the piggy bank.

Meanwhile, Abhimanyu is finding it difficult to control his feelings and runs away from the room being suffocated by the walls surrounding him.

Meanwhile, Akshara is trying to resolve her tension and grief in her jam-making and is trying to fight the memories threatening to break the barrier and pierce her heart.

She is being restless thinking that Abhimanyu has no idea that he has a son while Abhinav is unaware of her past relationship with Abhimanyu.