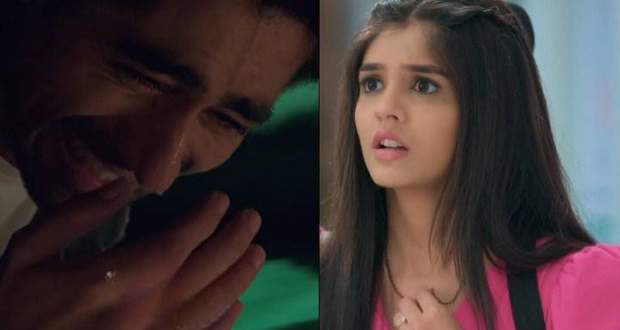 Abhimanyu arrives at the hospital and is taken to get the test done.

Meanwhile, Akshara arrives at the hospital to borrow money and a power bank.

After a while, Abhimanyu overhears Dr Singal telling Anand that Abhimanyu’s nerve is damaged which affects the communication in the brain and hand. He also mentions that with time it will be worse and asks Anand not to allow him to drive and do surgery.

Abhimanyu is aghast to hear this news and automatically goes to the Operation theatre reliving his surgical career and is horrified to see himself fail at the operation table.

Crying like a baby, Abhimanyu falls on the bed while on the other side Akshara falls and tears flow through her eyes.

She worries for Abhimanyu and asks Anand about him.

Realising that Abhimanyu has not told anything to Akshara Anand makes an excuse for him.

Akshara goes for her audition but has a strange feeling and tries to call Abhimanyu.

After a while, Akshara calls Manjari to share her strange feelings while Manjari says that it is just anxiety and tells her to do this audition for Abhimanyu.

In the meantime, Anand is searching for Abhimanyu and asks Neil to send Abhimanyu to him if he sees him.

On the other hand, Aarohi misbehaves with Kairav and goes to meet Rudra.

Meanwhile, Aarohi is daydreaming about her life in Rudra’s hospital and has high hopes of getting her license re-instated with Rudra’s father’s help. She plans to show Akshara and Abhimanyu that Aarohi is a winner.

Later, Akshara arrives at her destination but her feeling of weirdness persists.

She is waiting for her turn at the audition and questions her awkward feeling and being breathless without even going on the stage.