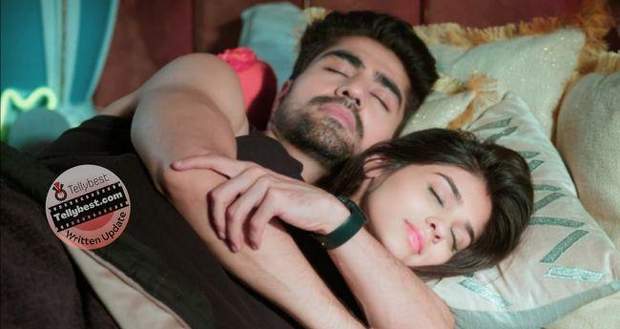 Just then Akshara comes there and Shefali tells Akshara to comfort him because everyone has tried it.

Akshara sings for Shivu but it does not work. Akshara finds the tag on the shirt that was pinching Shivu and making him cry.

Manjari is pleased with Akshara and declares that Akshara will be a wonderful mother.

Abhimanyu becomes sad hearing Manjari and goes away from there.

Meanwhile, Abhimanyu is balming Akshara’s abdomen with a heat pad while crying for Akshara and the lost hope when Akshara speaks in sleep about having cute kids.

Abhimanyu feels torn and goes to pray to Lord Shiva to grant him the wish of a perfect family and vows to not tell anyone about Akshara’s condition until he finds a solution for it.

The next morning, Akshara feels a pain in her stomach while bending down for flowers.

Manjari who was standing behind sees Akshara wince and asks her if she is alright.

On Manjari’s insistence, Akshara tells Manjari about her accident.

Manjari becomes worried and scolds Akshara for not telling her before.

Manjari's anger for Akshara elevates thinking she could have seriously hurt herself and tells her that she should never compromise her health for her career.

Just then Abhimanyu comes to Manjari and hugs her from behind.

Manjari scolds Abhimanyu as well and tells him that she should have told her the very moment.

Later, Akshara escapes Manjari’s scoldings while leaving Abhimanyu to deal with her.

Meanwhile, Akshara decides to send a sorry letter to the audition organisers as a sign of professionalism but is disheartened to see a post about Maya’s voice.

Seeing Abhimanyu, Akshara tells him that she wants to retain the identity of her voice because for a singer it is a matter of life and death.

Meanwhile, Mahima convinces Manjari to organise a veneration to show acceptance of Aarohi in the family.

Afterwards, Manjari explains to Aarohi about Satyanarayan veneration and a ritual of fasting which they will have to observe and they can break it only after taking the blessings of all family members.

Aarohi feels pleased and tells Manjari to conduct the veneration today itself while requesting to invite everyone herself so that she gets the chance to talk with other members.

In the meantime, Abhimanyu offers to take Akshara to meet the director and tells her that he would love to be supportive just as she was on his birthday.

Later, Akshara is talking to Manish on the phone when Aarohi pretends to tell her about the veneration and walks away while Akshara thought she couldn’t hear Aarohi because of being on the call.

Later, Akshara tells the music director that she is the voice behind Maya’s face while he refuses to believe her and mocks her as well.

On the other hand, Mahima and Neil are in dilemma about high profile client needing a kidney transplant but are in third place on the list and asking for a special preference.

Aarohi tells them to oblige the client if the other two people’s life is stable.

Hearing that only a medical director can take the call she tells Neil to bypass Abhimanyu and take the decision himself as Abhimanyu is not available.

Meanwhile, Akshara and Abhimanyu ask the director to give her one chance to prove herself.

© Copyright tellybest.com, 2022, 2023. All Rights Reserved. Unauthorized use and/or duplication of any material from tellybest.com without written permission is strictly prohibited.
Cached Saved on: Monday 21st of November 2022 12:44:06 AMCached Disp on: Saturday 10th of December 2022 01:58:16 PM