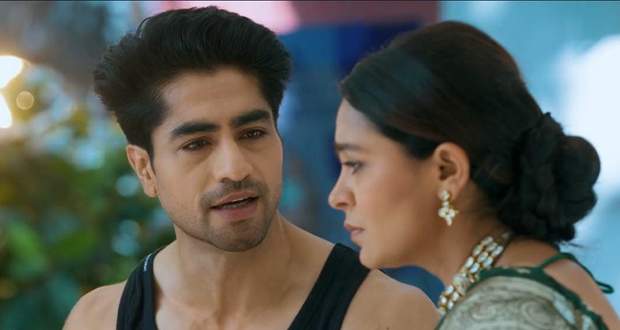 Kairav interrupts them and takes Akshara with him.

Meanwhile, Manjari tells Abhimanyu that Akshara has told the truth earlier if no one didn't hear her then it is not her fault.

Abhimanyu is not convinced by Manjari’s argument and keeps talking about the importance of truth and trust in a relationship.

Meanwhile, Akshara receives compliments from everyone and waits for Abhimanyu.

Abhimanyu tells Manjari that after all this distrust, he cannot go through with the wedding.

Meanwhile, Harshvardhan brings the police to the Goenka's house to have them arrest Akshara and Aarohi for Manjari’s accident.

Goenkas are shocked at the revelation and question Akshara and Aarohi who stands silent.

Manish scolds Akshara and Aarohi for letting them down.

Akshara tries to explain to everyone about the situation but Harshvardhan stops her.

Mahima calls off the wedding calling them liars and cheaters.

Manish and others try to convince them to let them hear the girls’ story but Mahima stubbornly stops them.

Mahima also silences Manjari who has just arrived while Harshwardhan asks them who was driving the car.

Harshvardhan threatens Aarohi’s career while the girls beg them to forgive them.

Just then Akshara tells everyone that she has been driving the car at the time of the accident.

Harshvardhan asks the inspector to arrest Akshara who has confessed her crime.

While Akshara is being taken to the police station, Abhimanyu arrives to save the day.