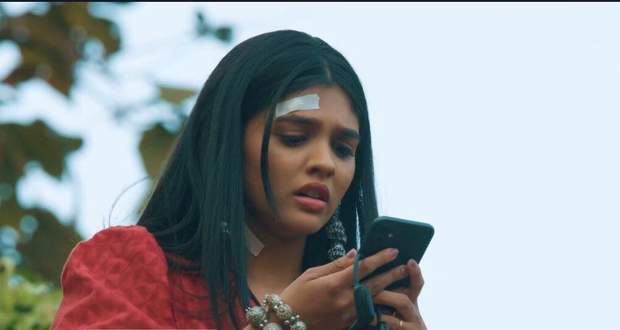 They both kiss on each other's forehead and hold each other while shedding tears.

Abhimanyu tells Akshara he has been dying to hear "I love you" from Akshara for ages and now finally his wish came true.

Akshara helps Abhimanyu to come down from the tree, both fall on their knees while confessing their love for each other.

Akshara promises Abhimanyu that she will not leave him alone anymore and will tell the truth to everyone.

Abhimanyu suggests they should run away far from there and marry each other so that no one finds them while Akshara tells him that the support of family is required for their love to be magical.

Meanwhile, Kairav knocks on Akshara's room and breaks through on not getting any response, Arohi appears ready as the bride.

Arohi somehow sends Kairav off but panics thinking about where Akshara is, she tries calling Akshara but fails.

At the same time, Manjari returns to the Birla house and denies calling back Abhimanyu, she tells the others that Abhimanyu will do whatever his heart will say to him.

Neil explains the whole situation to Manjari later, she prays to Lord Krishna to protect Abhimanyu and Akshara.

Back to Abhimanyu and Akshara, Abhimanyu agrees to go back with Akshara and confront Arohi and the family members.

However, Akshara worries about what will happen after they reveal the truth of their love to everybody, Abhimanyu hugs and comforts Akshara.

Upcoming YRKKH episode updates: Birlas inform the Goenkas about Abhimanyu's absence, Arohi rushes out after letting everyone know that Akshara was also nowhere to be found. On the other hand, Abhimanyu and Akshara proceed to marry each other in the temple.