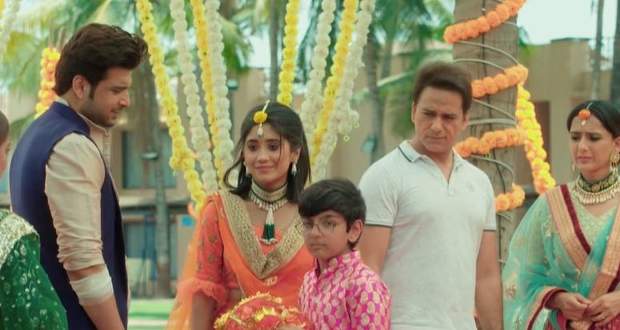 Today's Yeh Rishta Kya Kehlata Hai (YRKKH) 21 May 2021 episode starts with Kartik feeling proud of Kairav as he manages himself well after getting the news of Ranvir and Sirat's marriage.

Further, Kalavati puts forth her concern in front of Kartik and tells him that Sirat's marriage should be done with proper rituals and just not in the temple.

At the same time, Kartik convinces Ranvir and Sirat that he will take the entire responsibility of their marriage.

On the other hand, Manish yells at Kartik for being so selfless in helping Ranvir and Sirat. He asks Kartik to think about Kairav and how would he feel to see Sirat marrying someone else.

Further, Ranvir refuses to call his family for the wedding so that their presence doesn't create any ominous scene.

After some time, Ranvir and Sirat do their wedding shopping whereas Kartik and Manish wait for their special client.

Their special client is Narendra Chauhan who is Ranvir's father but Kartik is unaware of it.