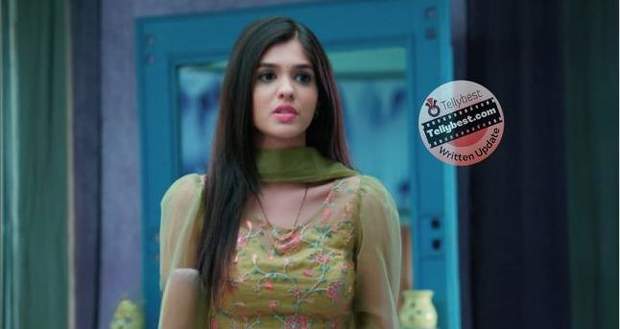 Today's Yeh Rishta Kya Kehlata Hai (YRKKH) 21st November 2022 episode starts with Akshara requesting one minute from the producer to prove that the voice belongs to hers.

The producer gives 1 minute to Akshara while Abhimanyu supports her and encourages her to claim her voice as hers.

In the Birla house, Arohi and Mahima forces Neil to take a decision about a critical patient on the organ list without consulting Abhimanyu.

Mahima and Arohi badmouth Abhimanyu and tell Neil that he needs to stop asking Abhimanyu for every decision and she made him sign the papers.

In the studio, Akshara sings “Lag Ja Gale” while Abhimanyu and the producer listen to the melodious voice.

In the Birla house, Arohi sits with Neil in the pooja and suddenly she grabs her head feeling dizzy.

Manjari hurriedly calls Abhi and Akshara but to no avail so Anand urges Manjari and Mahima to give Arohi some food as she has done the fast wholeheartedly.

However, Arohi refuses to eat any food before Akshara give her prasad and arti.

At the same time, Abhimanyu and Akshara run inside the house with a box of sweets.

Manjari turns towards them and tries to tell them about Arohi’s condition but Abhimanyu does not listen to her.

Abhimanyu tells Manjari that Akshara got the music album and she hugs Manjari.

At the same time, Arohi pretends to lose consciousness and Manjari runs to her side while Abhi and Akshara watch in shock.

Anand checks Arohi's pulse and declares that her sugar dropped because has not eaten anything the whole day.

Meanwhile, Akshara and Abhimanyu ask them why Arohi didn’t eat and get to know that Arohi kept a fast.

Abhimanyu and Akshara tell everyone that they don’t even know that there was a pooja in the house.

Akshara recalls that Arohi came to tell her something while she was talking on the call but Arohi didn’t say anything.

Neil gets angry and accuses Akshara of not listening to Arohi because she was busy on a call.

However, Akshara defends herself but Neil gets agitated and accuses Akshara of being wrong.

Abhimanyu knows that this misunderstanding is created by Arohi intentionally so he needs to handle the situation gently.

Akshara defends everyone that she didn’t know about the pooja that’s why she missed it.

Abhimanyu tries to handle the situation but Neel refuses to let Abhi interrogate Arohi about the case.

Hearing Neil’s refusal, Abhimanyu gets angry but Akshara calms him down while Neil sits near Arohi.

On the other hand, Manish eavesdrops on Swarna and Suhasini talking about the pooja incident and decides to do something to separate Akshara and Arohi.

In Birla's house, everyone congratulates Akshara for getting the contract for the music album.

In Neil’s room, Neil questions Arohi hesitantly if she told Akshara about the pooja clearly.

Arohi gets scared but lies, saying she told Akshara about the pooja clearly.

Manjari urges Aksara to accept Arohi as her sister-in-law so no cracks form between Abhi and Neil’s relationship.

Later, Akshara enters Arohi’s room with a cup of tea while Neil and Abhimanyu sit on the house's threshold.

© Copyright tellybest.com, 2022, 2023. All Rights Reserved. Unauthorized use and/or duplication of any material from tellybest.com without written permission is strictly prohibited.
Cached Saved on: Monday 21st of November 2022 11:33:57 PMCached Disp on: Saturday 10th of December 2022 02:49:10 PM