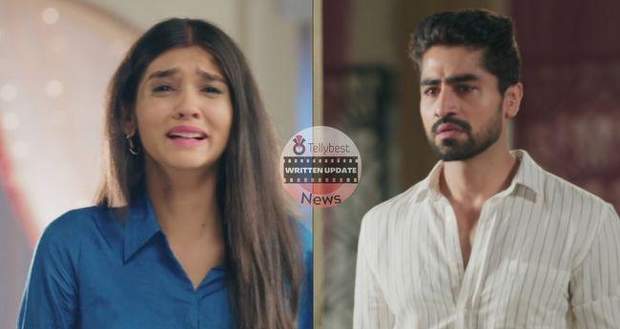 Today's Yeh Rishta Kya Kehlata Hai (YRKKH) 21st October 2022 episode starts with Aarohi telling Neil that Akshara will not support them while Neil defends Akshara and is sure that Abhimanyu and Akshara will support them.

After the call, Neil gets a notification and smiles widely.

Seeing Neil happily walk away, Abhimanyu makes a call and sets up a meeting.

Later, Swarna tells Suhasini that she has something to tell them once Manish returns.

Neil is happy to meet Akshara and confesses his love for Aarohi.

In the meantime, Abhimanyu questions Aarohi about her motive and tells her to forget him.

Neil is sure that Aarohi has changed and everything else takes a back seat when love is involved.

Abhimanyu tells Aarohi that he does not trust her and gives an offer to the top-notch hospital to leave Neil alone.

Elsewhere, Akshara tells Neil that Aarohi is only interested in him because of his involvement with Birla hospital and she does not love her.

Neil feels hurt at Akshara’s lack of support and leaves after telling her that his love is not a deal and that she wants to put conditions on them.

Later, Abhimanyu and Akshara cross paths at the park and tell each other about their meeting.

Meanwhile, Suhasini and Akhilesh are waiting for Swarna to tell the news.

On the other hand, Manjari cries at the pain and suffering she is going through as she punishes Abhimanyu for divorcing Akshara.

In the meantime, Akshara and Abhimanyu are of the same viewpoint that Aarohi and Neil should not marry if they do not have true love among them as it will end up in heartbreak only.

Afterwards, Akshara arrives to find the family gathered together.

Seeing Akshara, Swarna tells everyone that the boy that Aarohi likes is Neil Birla.

Manish is shocked to hear the name and declares that Neil’s name will not be taken again in the house.

Meanwhile, Abhimanyu comes home to find Neil standing in his way with an offer from a New York hospital while Aarohi welcomes him sarcastically.

Later, Aarohi instigates Neil against Abhimanyu for trying to bribe her to make her leave him.

Neil is bitter and angry at Abhimanyu for going behind his back and ashamed of him for not supporting him.

Other family members also speak against Aarohi while Parth calls Aarohi selfish which angers Neil and he holds Parth’s collar.

Neil pushes Abhimanyu in anger when he tries to intervene and warns him to stay away from his matter because he will not control his anger.