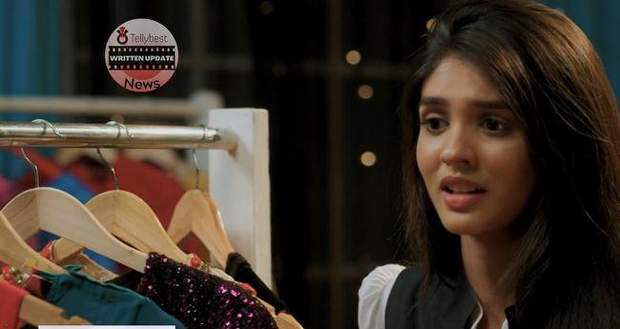 Today's Yeh Rishta Kya Kehlata Hai (YRKKH) 21st September 2022 episode starts with Mahima panicking at the thought of Kairav going to leave again while Abhimanyu again believes in Akshara who is only biding for time so that she can leave again.

Manjari and Neil try to calm her while Anand, Parth and Shefali also stand in support of Mahima and urge Abhimanyu to take action.

Manjari who is requesting them to be understanding feels a sudden pain in her chest and tells Abhimanyu to go and get Akshara immediately.

On the other hand, Akshara drops the mike at Dr Kunal’s feet reminding him of their first meeting where she has to sacrifice her voice and her dreams because of his selfish reasons.

She also tells him that today she has thrown the mike herself because she will not sing for Maaya.

Akshara tells him to get ready for more shock as she will tell him that she knows about his plans to keep her longer with Maaya by using Kairav as leverage.

Akshara tells him that she has Kairav and will find new proof again but whatever is happening with him today is all his fault.

Seeing Akshara go, Dr Kunal threatens her with consequences if she doesn’t sing for Maaya.

Just then Abhimanyu arrives at the competition venue and is shocked to hear Maaya crying at Akshara’s leaving without singing.

Abhimanyu understands everything that must have happened with Akshara while Dr Kunal promises Maaya that Akshara will come back for her and will sing for her.

Abhimanyu loses his temper and attacks Dr Kunal asking him about Akshara and accusing him of taking Akshara away from him.

Meanwhile, Akshara is trying to back the evidence from the detective.

Dr Kunal asks Abhimanyu to listen to him and tells him that Akshara has betrayed both of them.

He tells Abhimanyu that Akshara has made a deal with him to smuggle his brother to Mauritius as his brother is the most precious person in the world to her.

Abhimanyu does not believe him and tells him to think very carefully for if it turns out to be a lie then he will not spare him.

Just then Abhimanyu gets a call from Neil telling him about Manjari's heart attack.

Elsewhere, Akshara rushes to Birla's house after taking the last copy of the evidence.

At the same time, Abhimanyu and Anand are trying to stabilise Manjari who is drifting into a coma fast.

At the same time, Abhimanyu is trying to reach Akshara but her phone is off.

© Copyright tellybest.com, 2020, 2021. All Rights Reserved. Unauthorized use and/or duplication of any material from tellybest.com without written permission is strictly prohibited.
Cached Saved on: Sunday 2nd of October 2022 12:19:54 AMCached Disp on: Monday 3rd of October 2022 08:11:19 PM