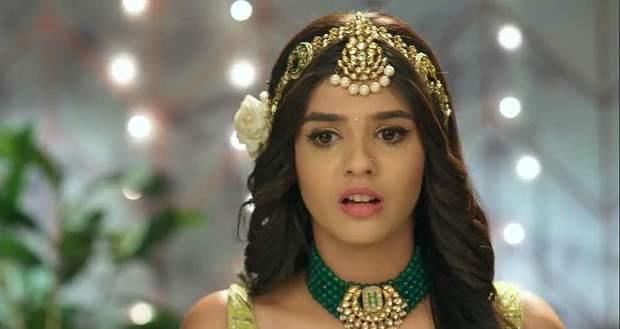 Harshvardhaan is not ready to listen to him, while Abhimanyu tells him in a final tone that neither Akshara nor anyone else will go to jail today.

Manish and other Goenkas are grateful for Abhimanyu.

Aarohi also thanks Abhimanyu but he loses his temper and tells her that it is because of Akshara that she is being saved otherwise he would have killed her himself.

Birlas try to convince Abhimanyu to let Akshara get the rightful punishment but Abhimanyu tells them that Manjari also does not want to press charges.

Abhimanyu also berates Goenkas for letting Aarohi manipulate Akshara emotionally and tells them that he will not tolerate this anymore.

Aarohi apologises to Manjari and Akshara for whatever she has done so far.

Harshvardhan tells Abhimanyu to resolve the matter of Manjari’s accident first as he cannot allow this to go on.

Abhimanyu accuses Harshvardhan of having an agenda on this issue as he does not care for Manjari.

Abhimanyu also tells them that it was not Akshara but Aarohi who was driving the car.

Abhi says that he will only marry Akshara if Aarohi does not attend the wedding.

Everyone is shocked at Abhimanyu's condition, whereas Abhimanyu leaves the decision to Akshara to choose between him and Aarohi.

Goenkas are worried about Akshara for whom this decision was like walking on a sharp sword.

Afterwards, Mahima and Harshvardhan berate Manjari for taking back the case and supporting Akshara and Aarohi.

Meanwhile, Manish advises Aksahara to favour Abhimanyu as Aarohi has committed a sin while keeping it a secret and therefore deserves this punishment.

Both Neil and Parth try to comfort Abhimanyu who wants to be left alone.

They also tell him that he shouldn't put Akshara in such a place however, Abhimanyu is hurt and wants to feel secure in his relationship with Akshara.

Akshara tells Manish that she still can’t pick one. However, Manish strictly tells Akshara that she has to choose Abhimanyu as Manjari could have died because of Aarohi and she was not ashamed of it too.

The rest of the Goenkas also supports Manish and tells Akshara to go and tell Abhimanyu that she will marry him with all his conditions.

© Copyright tellybest.com, 2020, 2021. All Rights Reserved. Unauthorized use and/or duplication of any material from tellybest.com without written permission is strictly prohibited.
Cached Saved on: Saturday 28th of May 2022 07:09:55 PM