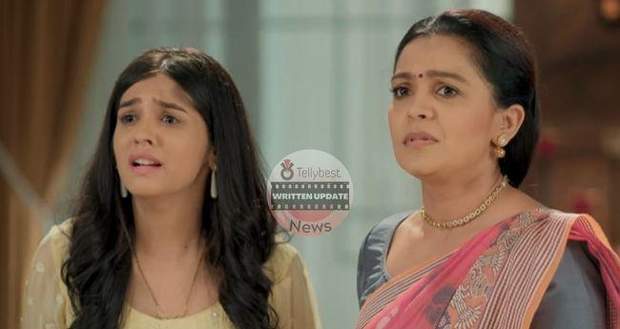 Today's Yeh Rishta Kya Kehlata Hai (YRKKH) 22nd August 2022 episode starts with Mahima happily telling everyone that the warrant for Kairav has been released and they should go there too to find Kairav, wherever he is hiding.

Abhimanyu tells Mahima and others that no one will go there as Akshara and her family will feel insulted.

He also tells them that they are not the kind of people who will hide Kairav in their house.

However, Mahima stubbornly tells Abhimanyu that no one can stop her from going there and searching the house for Kairav because she is sure he is hiding there.

Before leaving, Mahima also tells Abhimanyu that he should learn from Akshara to support one's family in time of need.

On the other hand, Akshara is shocked to see Kairav at home and insists on telling Abhimanyu.

However, Vansh stops her from telling Abhimanyu saying he will not understand.

Just then, the police arrive with a warrant followed by Mahima who firmly believes that Kairav is hiding there.

Despite Vansh's advice, Akshara is about to tell Abhimanyu when the police interrupt her telling them that Kairav is nowhere.

Somehow, Kairav manages to leave before the police can find him there.

Vansh is relieved that Kairav escaped before the police could find him but is equally worried knowing how fragile his mental and physical state is.

Feeling guilty, Akshara tells everyone to not worry about Kairav and asks Aarohi to take care of the family in her absence as she will not be able to come due to Abhimanyu’s surgery.

Later, Vansh tells Akshara that he is going to search for Kairav and he will not let him go back to jail until he is well enough.

Akshara makes Vansh promise that he will tell her if he finds Kairav and she will try to make Abhimanyu see their side.

At the Birla house, everyone seeks blessings from God for Abhimanyu.

After a while, Harshvardhan asks Akshara to get Abhimanyu’s file.

In her room, Akshara gets a call from Kairav who calls her to meet him alone.

Meanwhile, Akshara tries to convince Kairav to go back but he tells her that he will not go to jail because they will kill him.

He also tells him that he will leave the city and requests her to meet one final time.

Hearing the panic in Kairav’s voice, Akshara gets worried about Kairav committing suicide and assures him that she will come to him.

However, Abhimanyu who has come to find Akshara overhears her conversation and feels betrayed.

© Copyright tellybest.com, 2020, 2021. All Rights Reserved. Unauthorized use and/or duplication of any material from tellybest.com without written permission is strictly prohibited.
Cached Saved on: Friday 30th of September 2022 08:02:01 PMCached Disp on: Saturday 1st of October 2022 03:59:59 PM