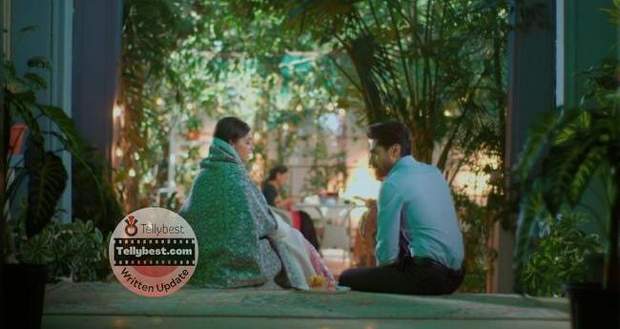 Today's Yeh Rishta Kya Kehlata Hai (YRKKH) 22nd December 2022 episode starts with Akshara showing Neil and Abhimanyu Aarohi’s ultrasound report and tells them that Aarohi is pregnant now as her gynaecologist has sent the report to her.

Meanwhile, Aarohi is worried about Neel’s decision about her and wonders how will he react knowing that she is pregnant this time now.

On the other hand, Neel tells Akshara and Abhimanyu that Aarohi has betrayed him in the worst possible way but he cannot punish his child for what Aarohi did and will continue to live with Aarohi so that his child can have a father and a mother both.

He also shares that he does not want to go through the pain of losing a child as he felt when he found out about Aarohi’s truth.

Later, Manjari asks Neil to join the Veneration along with Aarohi.

Aarohi looks harried but Neil's invitation to join her relaxes her and she thanks him for forgiving her.

However, Neil tells him that he is doing it for his baby and not her.

Afterwards, Abhimanyu is tying the Kalava on Akshara when Aarohi asks him to tie one on her hand too.

Aarohi thanks Akshara and Abhimanyu for saving her marriage and telling Neil about her pregnancy.

Later, Akshara and Abhimanyu are celebrating Christmas eve by exchanging gifts with each other.

They both smiles at seeing the same gift in each other's box.

Abhimanyu teases Akshara for stealing his thoughts and tells her that he has brought this star for her because they are known to protect everyone and will help them find their way to each other.

Akshara smiles and tells him that she has some thoughts while buying the gift.

The next day, Birla are gathered in the hall to celebrate Christmas with Shivu where Akshara is dressed as Angel while Abhimanyu is dressed as  Reindeer.

Afterwards, Neel comes to thank Aarohi for being a replacement Santa for Shivu.

Meanwhile, Abhimanyu and Akshara pray that Aarohi remains good and happy so that Neil can have a normal married life.

After a while, Birlas gather around a table to make a toast where Nishtha and Neil tell them to drink one thing that they are most happy about.

© Copyright tellybest.com, 2022, 2023. All Rights Reserved. Unauthorized use and/or duplication of any material from tellybest.com without written permission is strictly prohibited.
Cached Saved on: Wednesday 25th of January 2023 11:51:49 AMCached Disp on: Wednesday 1st of February 2023 05:55:27 PM