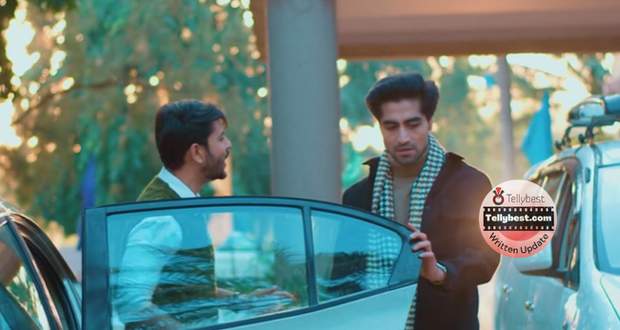 Just then the clocks at the shop begin to chime while Abhimanyu and Akshara look at each other with pain-filled eyes, trying to get their fill of each other.

Later, they turn away and go their way while Akshara looks at the clock that has started to work again.

Meanwhile, Shefali is looking for her makeup kit.

In the meantime, Ruhi is playing with Shefali’s make-up and is about to try it on when Shefali sees it and scolds Ruhi for taking away her make-up without her knowledge.

However, Aarohi tells her to not scold her as she is just a child and children do this mischief.

Ruhi gets hurt and runs away missing Abhimanyu who never lets anyone scold her.

She tells him to ask her to not be overstressed and take a break from work.

Elsewhere, Akshara feels overwhelmed after her encounter with Abhimanyu and tries to cool herself by splashing water on her face.

Just then Neelam Amma comes there reminding her about her niece's wedding which they all have to go to.

In the meantime, Parth comes to Shefali to scold her for being rude to Ruhi who only took her makeup.

Shefali looks at him complainingly and tells him that she can go out without make-up, all thanks to him.

She also tells him that it is because of him that everyone mocks her for using so much makeup but if he is that gutsy, then he should go and tell everyone that she has to hide her wounds.

Just then Parth once again slaps her which she hides from her face with make-up.

Shivansh calls Shefali to tell her about scoring low on the test but Shefali tells him to not worry about it.

Later, Parth apologizes to Shefali and tells her that she should not provoke him into beating her because he has so much pressure from work and his mom.

Shefali rebukes him saying that men who respect woman never raise their hand at her no matter how big the reason is and those who have no respect for woman raises their hands.

She also tells him that she is tolerating his misdemeanor for the sake of Shivansh so that he can have a family but this does not mean that she will do it for a very long time.

Later, Akshara digs out the saved gift papers to wrap the gifts for the wedding but the thought of Abhimanyu keeps bothering her.

Later, Abheer brings his notebook to Akshara to write a thank you note from his parents and is surprised to see Abhimanyu’s name in place of his father.

Akshara gets shocked and tears the paper in pieces, telling Abheer that she is very angry at him.

Later, Abhinav comes to help her in packing gifts and jokes about becoming Peelu Kumar at the wedding with a Yellow pant shirt.

However, Akshara tells him that she is there to stop him from becoming one.

The next day, Aarohi is discussing some cases with Abhimanyu but gets cut off due to a poor connection.

Later, a noise outside disturbs Abhimanyu and he tells Aarohi that he will call her back later.

Abhimanyu is agitated to hear the noise and comes out to talk to the manager but stops dead seeing Akshara dancing at the wedding party.

Abhimanyu imagines it to be a hallucination and shuts his eyes away but the scene remains the same after opening his eyes.

Akshara is inviting everyone to join the dance and drags Abhimanyu with her as well but gets shocked to see him again.

Just then Abheer and Abhinav also join them and becomes happy to see him.

He tells Abhimanyu that people who are meant to together find their way back to each other, no matter how hard they try to escape the meeting.

He addresses Akshara and tells her that her Dilwale Sir Jee is back with them.

Akshara greets him while asking God why to entangle the thread of the past and present.

© Copyright tellybest.com, 2022, 2023. All Rights Reserved. Unauthorized use and/or duplication of any material from tellybest.com without written permission is strictly prohibited.
Cached Saved on: Wednesday 25th of January 2023 09:03:27 AMCached Disp on: Wednesday 1st of February 2023 05:43:11 PM