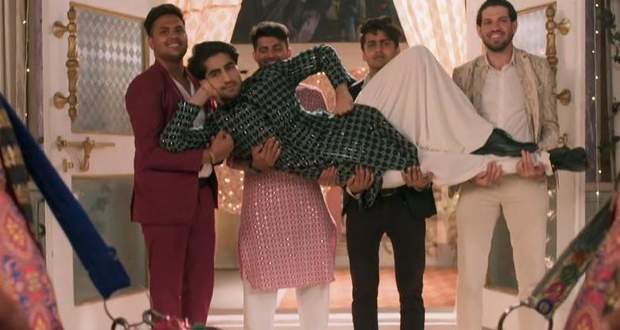 All people laugh with glee at Abhimanyu’s reason and Swarna makes them sit again to perform Aarti.

Later, the swing breaks and Abhimanyu and Akshara fall.

All the people start to laugh seeing their condition while Swarna tells them now their evil eye is warded off properly.

Meanwhile, Harshvardhan calls Anand for the twelfth time to ask about the happening at the hospital and gets rebuked.

Elsewhere, Kairav, Vansh and others ask Akshara and Abhimanyu to clean off the confetti before it spreads all over their body.

After a while, Aarohi comes to Neil to give him a gift and instigates him against Abhimanyu saying that Abhimanyu is feeling jealous of him.

Meanwhile, Abhimanyu tells Akshara that pretending everything is fine is torturing him and wants to tell everyone the truth.

Akshara tries to reason with him but gives up telling him to do what he thinks is best.

As AbhiRa returns Aarohi observes Akshara’s sad demeanour and understands that Abhimanyu and Akshara are at odds and wonder about its reason.

After a while, Manjari calls Akshara and apologises to her for misunderstanding her while Akshara tells her that she has nothing to apologise for.

Manjari also asks Akshara to not let her problems affect her relationship with Abhimanyu while Akshara tells her that it is not the case with them.

Afterwards, Manish and Akhilesh announce the games of bangles where a male member of the team has to search for the right size of the bangle and put it on his partner within time.

As the team takes their positions, Abhimanyu taunts Akshara for acting effortlessly in front of family members and fooling them.

However, Akshara tells him that their families do not deserve to be dragged in their fight and have many hopes for them.

She also tells Abhimanyu to play and win the game even if he doesn’t want to play it as a couple.

Abhimanyu gets angry at Akshara and accepts the challenge.

© Copyright tellybest.com, 2022, 2023. All Rights Reserved. Unauthorized use and/or duplication of any material from tellybest.com without written permission is strictly prohibited.
Cached Saved on: Monday 21st of November 2022 01:01:14 AMCached Disp on: Thursday 8th of December 2022 02:46:41 AM