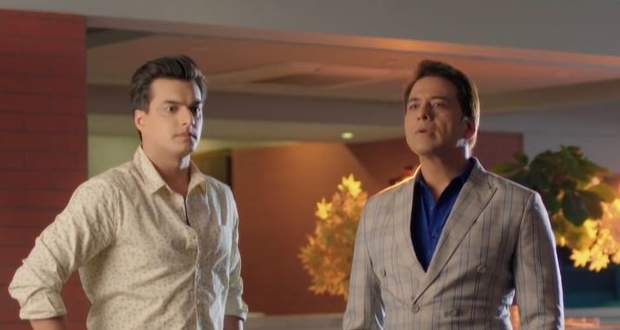 Manish invites Narendranath to the wedding while Kartik talks to Ranvir and Sirat.

Later, Ranvir calls his sister, Nidhi to inform her about his marriage.

He talks to his mother on call and gets emotional.

Sirat tells the Goenka's that the Mehendi function cannot happen the next day and shows Kartik her injured hands.

Kartik applies ointment to her injuries while Suwarna taunts her.

Later that night, Ranvir informs Sirat about the conversation with his mother and gets emotional while she calms him.

The next morning, Maudi tells Sirat that she will not come with her after the marriage which makes her cry.

Kartik goes to Sirat and consoles her while assuring her that Maudi will go with her.

She asks him if he will forget her while he ignores it.

© Copyright tellybest.com, 2020, 2021. All Rights Reserved. Unauthorized use and/or duplication of any material from tellybest.com without written permission is strictly prohibited.
Cached Saved on: Monday 3rd of October 2022 05:28:27 AMCached Disp on: Friday 7th of October 2022 02:37:24 PM