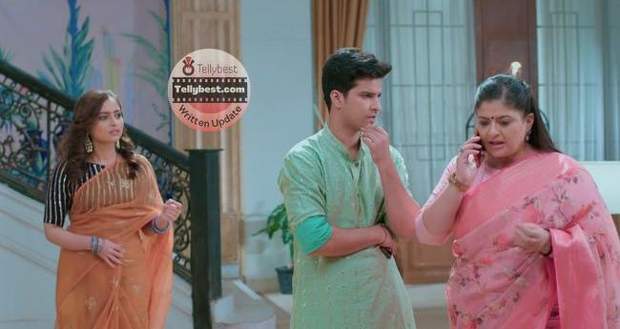 However, Arohi taunts Akshara by pretending to take care of her while Akshara orders Arohi to stop her act as only they (Arohi and Akshara) are present in the room.

On the threshold, Abhimanyu tells Neil that Akshara and Arohi are both sisters likewise they are also brothers so they should not fight.

However, he cannot hear anything bad about Akshara.

Neil agrees to Abhimanyu’s request and both brothers hug each other, strengthening their brotherhood.

In Arohi’s room, Akshara tells Arohi that she is ready to move on and forget everything she did.

Arohi angrily accuses Akshara that she hasn’t faced any difficulties in life while her (Arohi) own father or grandfather (Manish) has broken ties with her.

Akshara sassily blames the events on the Arohi's karma.

Arohi grabs the coffee cup from Akshara and refuses to accept Akshara’s peace treaty as she thinks Akshara wants the limelight she is getting.

Meanwhile, Abhimanyu decides to keep an eye on Arohi as she can do anything to create problems in their life.

Later, Abhimanyu stands in the middle of the room while Akshara enters the room glumly and picks up a market set on the side table.

She draws a square in which delete is written and does the same on Abhimanyu’s hand.

Both Akshara and Abhimanyu touch the delete drawing three times indicating the removal of all stress and worries of the day.

Akshara wraps her arms around Abhimanyu’s neck and kisses his cheek while both decide to go for a drive.

Later, in the car, Akshara and Abhimanyu are enjoying their time, suddenly baby wet wipes ad starts on the podcast.

Akshara starts to plan for the child and declares that baby Birla will reach next year while Abhi pales.

Later, Abhimanyu gives ice cream to Akshara and she eats it at lightning speed.

Seeing Akshara eat so fast, Abhi teases her that he knows ice cream is her first love but she can eat slowly.

Akshara stops eating and recalls Dr Kunal stopping her from eating ice cream while Maya would enjoy it alone.

Akshara's eyes fill with tears and she tells Abhimanyu that she was prohibited from eating ice cream when she was singing for Maya.

Abhi offers his ice cream to Akshara and adorably tells her he will bring more until her heart fills.

The next morning, Mahima greets Arohi and tells her ambitions are still pending as she wants to become the director of Birla hospital.

Mahima leaves while Akshara enters the living room playing with Shivu and glares at Arohi.

Arohi decides to get in the Birla family good books so she can acquire shares of Birla hospital.

In the Goenka house, Akshara enters the house and happily declares that she got the contract.

In the hospital, a furious man accuses Abhimanyu of taking bribes and selling the donor kidney to someone else.

Meanwhile, everyone hugs Akshara happily while she gives a check for half her signing amount to Swarna.

Akshara prays to Naira’s photo album and cries while Kairav cheers her up by giving her a chocolate.

Later, Swarna worriedly asks Akshara if she is facing some issues because of Arohi.

In the hospital, Abimanyu asks Dr Rohit who changed the list order while Neil announces that he changed it.