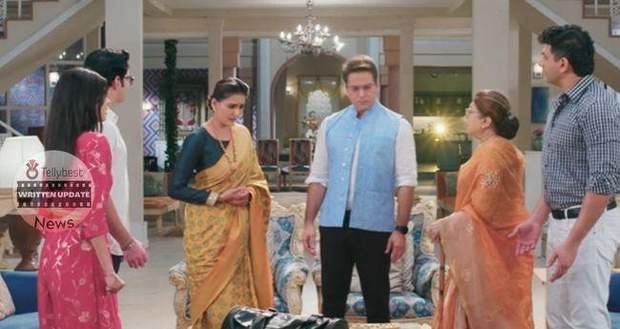 Neil accuses Abhimanyu and Akshara of not understanding his love for Aarohi and trying to separate him from Aarohi.

Abhimanyu tells him that he cannot ignore him and let him ruin his life by getting involved with a selfish girl like Aarohi who only thinks for herself.

However, Neil tells him that Aarohi has changed otherwise she would have accepted the job offer and left instead of coming here and telling him.

Abhimanyu points out that Aarohi has done nothing but created differences between the brothers instead of talking to him separately.

Neil ignores his argument and threatens Abhimanyu with suicide if he does not accept his love for Aarohi.

Meanwhile, Akshara forces Manish to take his medicine and tells them that she thinks Aarohi does not love Neil.

Later, Abhimanyu talks to Shivansh about trying to stop Neil from committing a grave mistake while Neil tells him to leave him alone.

Meanwhile, Aarohi accuses Akshara of being jealous of her and asks Akshara not to let her become a Birla daughter-in-law.

Seeing Akshara and Aarohi’s argument escalate, makes Manish angry and he asks them to cut it out.

Aarohi comes to Manish and tells him to think of her happiness and not Akshara’s complaints.

Later, Aarohi sends a suicidal voice note to Neil who gets worried about Aarohi and in his attempt to save Aarohi meets with an accident.

Just then Akshara spots him and takes him to the hospital.

Meanwhile, Abhimanyu and Harshvardhan arrive at the hospital just when Akshara rushes out while Abhimanyu spots her leaving.

Akshara drags Aarohi down in front of everyone and tells them that because of Aarohi’s suicidal voice note Neil met with an accident whereas she is enjoying music here.

Aarohi pretends to suffer from depression and tells everyone that she is having these thoughts ever since everyone fights because of Neil and her relationship.

However, Akshara shames her for lying and counting the symptoms that she knows as a doctor while being least concerned about Neil.

She also tells Aarohi that this proves her love for Neil and how much she cares for herself.

After a while, Aarohi goes to the hospital to check on Neil and asks the doctor to keep her updated.

She also messages Mahima about being on her side despite her relationship with Neil.

Meanwhile, Anand is telling about Neil's accident when Manjari hears about it and panics and insists on knowing everything.

At the hospital, Harshvardhan praises Akshara for bringing Neil in time and sharing about learning the hard way that it is a woman like Akshara that brings stability in life.

Abhimanyu also recalls the moments when Akshara took a stand like a protective shield.

© Copyright tellybest.com, 2022, 2023. All Rights Reserved. Unauthorized use and/or duplication of any material from tellybest.com without written permission is strictly prohibited.
Cached Saved on: Monday 21st of November 2022 05:57:56 AMCached Disp on: Tuesday 29th of November 2022 10:43:35 AM