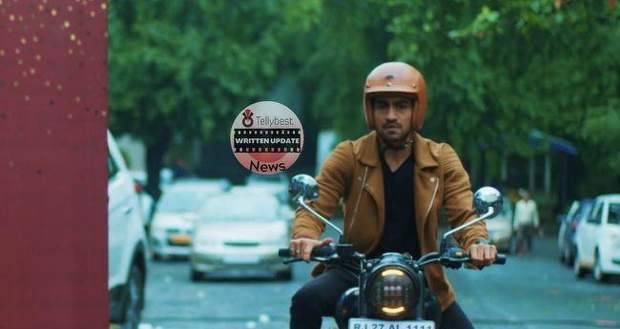 Today's Yeh Rishta Kya Kehlata Hai (YRKKH) 22nd September 2022 episode starts with Akshara climbing the window to come to Abhimanyu’s room and assumes that Abhimanyu must have gone to the hospital due to some emergency.

In the meantime, Abhimanyu is trying Akshara’s phone but finds it off.

Meanwhile, Akshara arranges the evidence in Abhimanyu's room and leaves after leaving a message in his room.

At the hospital, Mahima tells Abhimanyu that Manjari has gone into Coma and only Akshara is responsible for that. She also reminds him of his promise to her as Akshara is not back after 24 hours.

At the Goenka’s house, Suhasini is praying for Akshara’s safe return along with other family members when Akshara comes in singing a Bhajan.

Everyone becomes happy to see her and asks her where she had been.

However, Akshara tells them that they will all find out in due time but for now, she has found the proof of Kairav’s innocence.

Meanwhile, Abhimanyu is sitting with Manjari and reliving Mahima’s words for Akshara.

At the Goenka house, Suhasini is planning a grand celebration with her family while Akshara tries to contact Abhimanyu.

Later, Abhimanyu arrives home and messages Akshara that he is coming to meet her.

Akshara becomes happy to read Abhimanyu’s message and goes to get ready to welcome him.

Meanwhile, Abhimanyu leaves on his bike to reach Akshara to get his answers.

As Abhimanyu arrives at the Goenka house, Akshara comes running to him to hug him.

Other members of the Goenka family also join them.

However, their happiness turns to shock when they see media people entering their house.

Akshara misunderstands Abhimanyu’s intentions and assures Kairav that everything will be fine.

Abhimanyu announces to the press that Kairav Goenka has spoilt his sister Anisha Birla’s life and killed her.

Akshara and Goenkas are shocked at the announcement.