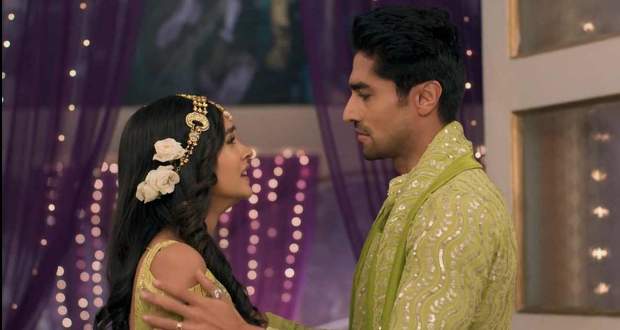 Today's Yeh Rishta Kya Kehlata Hai (YRKKH) 23rd April 2022 episode starts with Abhimanyu complaining to Neil and Parth that Akshara is not able to choose between right and wrong.

Abhimanyu is in agony for putting Akshara in this situation but he understands that Aarohi has become cancerous to Akshara and needs to be removed from her life.

Abhimanyu also tells them that it is not wrong of him to expect to be a priority for her.

Abhimanyu leaves them and goes to the park.

Soon Akshara comes to him and gives her answer through a song which breathes a new life in him.

Akshara recalls Swarna’s word that Abhimanyu’s anger is driving him at the moment but when his anger will subside he might see things differently.

As Akshara is going to Abhimanyu, she gets a call from Anupama who tells her to always listen to her heart when in a position of conflict.

Coming out of her reverie, Akshara is happy to see Abhimanyu happy.

Meanwhile, Aarohi is crying in her room complaining to her dead mother for being left alone without being in the wrong.

Abhimanyu and Akshara come inside along with the Birlas.

Just then Aarohi comes down while everyone watches her with bated breath.

Aarohi tells Abhimanyu that Mehndi is incomplete without a sister applying Mehndi on the bride and takes ‘Neg’ for the ‘Shagun’.

Abhimanyu asks Aarohi to stop dramatising and gives her ‘Neg’.

Seeing Akshara unhappy, Abhimanyu wants to be reassured that she is not regretting choosing him.

Akshara tells Abhimanyu that despite being happy to choose him, she needs time to completely recover from leaving Aarohi behind.

Just then Neil's voice startles Akshara and her hand goes into the water bowl removing the Mehndi applied by Aarohi.

Abhimanyu observes Akshara’s worry about the Mehndi and her silence over it.