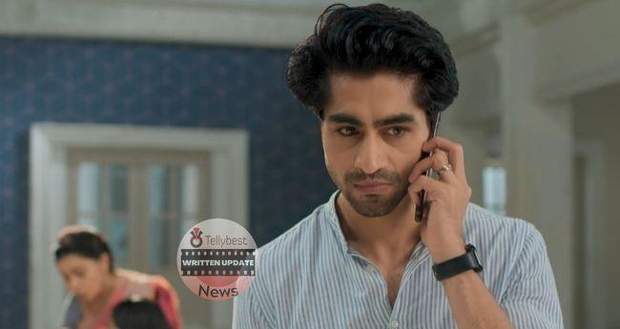 Anxious about Kairav and Abhimanyu, Akshara looks at the reports with worry.

As Akshara comes downstairs, Anand and Harsh are giving instructions to Abhimanyu to leave to prepare for the operation.

At the site, Kairav sees Abhimanyu and wonders why has Akshara brought Abhimanyu with him.

Abhimanyu comes to confront her and tells her that she has once again proved that she only supports her family no matter whether right or wrong.

Seeing Abhimanyu, Akshara panics and tells him to go as Kairav will run away after seeing him.

She also tells him that she has come to convince Kairav to surrender so that his innocence could be proven in court.

Abhimanyu asks Akshara to call Kairav and make him convince him that he is innocent and if he succeeds then he will also take the case back and will fight with his family to support him.

Akshara rejoices in Abhimanyu’s assurance and goes to find Kairav.

Meanwhile, Manjari locks the home along with all the Birlas and prays that she comes back with happy news.

After a while, Abhimanyu and Akshara look lost for not being able to find Kairav.

Akshara asks Abhimanyu to only focus on his surgery today and leave the tensions for tomorrow.

At the hospital, Harshvardhan and Manjari share their worries as Abhimanyu’s parents and give strength to each other for Abhimanyu.

In the meantime, Goenkas prays for Abhimanyu’s recovery.

Later, Dr Kunal is in his cabin and promises his sister that he will make her dream come true.

After a while, Abhimanyu and Akshara come to Dr Kunal who asks him to relax and have faith in him.

Meanwhile, Kairav is on the run and complains to Akshara for not coming alone.

In the meantime, Manjari motivates Neil to think positive about Abhimanyu’s surgery.

Afterwards, Abhimanyu receives blessings from everyone before going to the OT.

Harshvardhan tells Abhimanyu that he is a fighter and asks him to come roaring back from the surgery and take back his place as before.

Abhimanyu holds Akshara’s hand and takes strength from her presence.