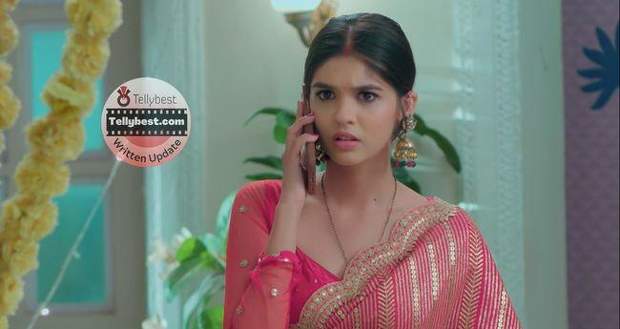 Today's Yeh Rishta Kya Kehlata Hai (YRKKH) 23rd December 2022 episode starts with Nishtha telling everyone that she has prepared the drink so they can toast about something that they are the happiest or hopeful about.

Nishtha starts by raising a toast to come second in the college.

Shefali and Parth cheers for having Shivu in their life.

Anand toasts for sobriety while Mahima cheers for letting go of her anger and stubbornness.

Manjari cheers for upcoming grandchildren while Harshvardhan toasts to coming closer to his family despite living apart.

Neil cheers for new beginnings while Aarohi cheers for getting a second chance in life.

Later, Akshara cheers to becoming a mother despite the complications while Abhimanyu cheers for Akshara’s concert tomorrow.

After a while, Akshara brings Manjari aside and tells her to not worry about the concert as she will be extra careful and that Abhimanyu will also be there to protect her.

Just then, Abhimanyu comes to Akshara telling her that he has to go to Jaipur urgently for surgery which he cannot refuse.

Akshara looks disappointed but calls the concert organiser to tell him that she will not be able to come to the concert as there is some emergency at home.

Abhimanyu feels bad for Akshara when Neil offers to take her to the concert but Akshara tells him to not worry as she has only agreed because of Abhimanyu’s presence and she would like to keep the pact for keeping the babies safe.

Later, Neil jumps on Abhimanyu’s back asking him to bring Samosa from Jaipur for Aarohi.

Abhimanyu looks at him seriously and asks him if he has really moved on or if is he pretending to be happy.

However, Neil tells him that there is no point in him being sad about what Aarohi did to him if he wants to make a good life for his baby.

He also tells him that he wants to support Aarohi if she wants to change her ways and become good.

Showing him the rattle, Neil tells him that he always keeps it with him as this serves as a reminder that he is going to be a father soon.

Later, Abhimanyu apologises to Akshara for not being able to keep his promise and tells her to take very good care of her while he is away.

As Abhimanyu is about to leave, he gets a very bad feeling and hugs Akshara tightly saying that he does not want to go away.

While getting something from the cabinet Akshara gets tangled with a rug and would have fallen if not for Abhimanyu.

Abhimanyu panics and removes all the rugs from the room and tells her to not leave the room until he returns.

Akshara promises to stay inside the room until he returns.

Just then Neil also comes to promise Abhimanyu that he will look after Akshara in his absence.

Before Abhimanyu could leave, Akshara presents him with her bracelet which has been acting as a lucky charm for them.

She assures him that this will always keep them together and safe.

Afterwards, Akshara prays for her family to be happy and safe forever.

The next day Akshara wakes up to be pampered by her family while Abhimanyu calls her to give instructions and get an update on Akshara before going into surgery.

Later, Neil tells Aarohi to not be hesitant with him because of their baby.

He also promises to accompany her on the walk on the lake in the evening.

© Copyright tellybest.com, 2022, 2023. All Rights Reserved. Unauthorized use and/or duplication of any material from tellybest.com without written permission is strictly prohibited.
Cached Saved on: Wednesday 25th of January 2023 04:07:16 PMCached Disp on: Tuesday 31st of January 2023 07:33:09 PM