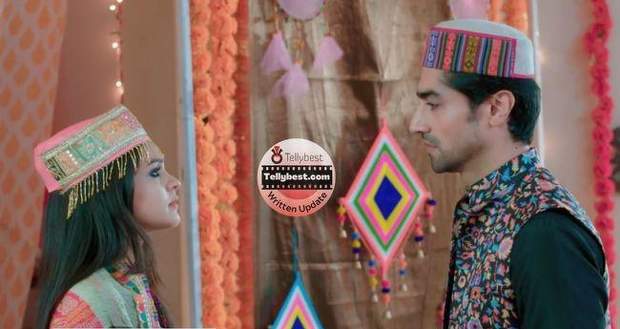 Today's Yeh Rishta Kya Kehlata Hai (YRKKH) 23rd January 2023 episode starts with Abhinav telling Abhimanyu that there is definitely some connection between them which is why they are meeting again and again.

Abhimanyu Gets Invited to the Wedding

Abhinav introduces Abhimanyu to Neelam Amma as a client who is more like a family.

Neelam Amma tells him that his leaving yesterday in a rude manner is not good and there is a way of saying bye to those who they leave behind.

Later, she invites Abhimanyu to attend the wedding but Abhimanyu tries to refuse because of so much work.

However, Neelam amma orders him to attend the wedding saying it is considered inauspicious if someone leaves in the middle of a wedding.

Abhimanyu tells her that people leave a relationship in the middle and she is not letting him leave a wedding.

Abhinav smiles at Abhimanyu’s deep thought but takes him with him.

Later, Abhinav praises Abhimanyu looking dashing in a traditional Himachal dress when Abheer comes to them.

Just then Neelam Amma calls Abhinav while Abhimanyu wards off the evil eye from Abheer.

Abheer tells him that he has some serious talk to do and climbs up on the chair to get on eye level with Abhimanyu.

He warns Abhimanyu to not hurt his father who is a good man and does not deserve his rude behaviour.

Abheer also tells him that in order to become a hero, one does not need Abs but the goodness of heart.

He threatens to smash Abhimanyu if he again hurts his father but his pant slips down.

Abhimanyu smiles at his protectiveness and offers to help which Abheer takes after failing to button his pant.

Later, Akshara feels uncomfortable at Abhimanyu’s presence at the wedding and goes to talk to Abhinav.

She scolds Abhinav for involving Abhimanyu in the wedding and tells him that he will be the one to get hurt in future.

Akshara becomes anxious and tells him to keep Abhimanyu out of his home and life but goes to confront him when Abhinav does not respond.

However, she gets embarrassed seeing Abhimanyu instead of Abhinav.

Just then Abhinav comes there too and smiles at Akshara’s mistake of mistaking Abhimanyu as her husband.

Abhimanyu tells him that he should leave or else these confusions will continue to happen and cause problems.

However, Abhinav stops him saying Neelam amma will scold him.

Abhimanyu tells him that he should better change so as not to cause more problems.

Later, Akshara scolds Abhinav for inviting Abhimanyu while Abhinav tells her to not spoil her mood during the wedding.

Later, Abhinav admires Akshara’s favourite flowers when Muskaan comes to him and tells him to confess his love to Akshara and if he cannot say it directly, then say it with a gesture like putting the flower in Akshara’s hair.

Meanwhile, Manjari is upset at Manish and Kairav’s refusal of Abhimanyu’s and Aarohi’s marriage and tells Swarna that she does not want Abhimanyu to suffer anymore in his life.

Later, Abhinav brings flowers for Akshara and is trying to gather the courage to give them to her when Abheer comes there exposing his intentions to Akshara.

Abhinav gets puzzled and tells Akshara that it is all Muskaan’s idea.

Akshara is unaware of his intentions and takes the flower to put it in her hair and attaches another to Abheer’s too.

Meanwhile, Abhinav gets a call while Abhimanyu comes and stands beside Akshara.

Neelam amma tells every couple to come and take the blessings of Shiv and Parvati.

Later, Neelam Amma calls Abhimanyu to take the blessing as well but Abhinav tells her to not force him as he does not believe in God which shocks Akshara.

Later, Akshara is applying Mehndi to the bride when Neelam Amma forgets the lyrics of the song she is singing.

Akshara reminds her of the lyrics while Muskaan requests her to sing the tune as well.

© Copyright tellybest.com, 2022, 2023. All Rights Reserved. Unauthorized use and/or duplication of any material from tellybest.com without written permission is strictly prohibited.
Cached Saved on: Wednesday 25th of January 2023 08:54:46 AMCached Disp on: Tuesday 31st of January 2023 07:18:25 PM