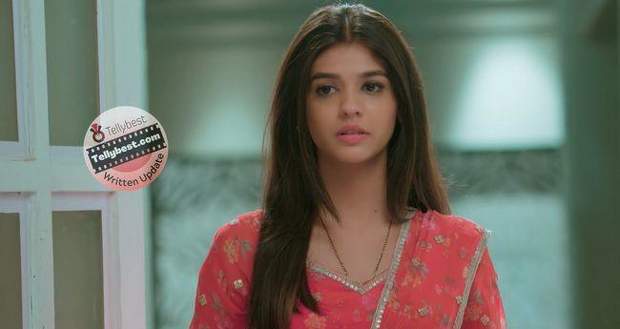 Dr. Rohit takes the man away while Abhimanyu glares at Neil and says that they will talk at home about this matter.

Outside the hospital, Manish is walking inside the room but stops when he sees Arohi.

Arohi requests Manish to show his medical reports to her but Manish refuses and advice her to maintain peace and harmony in her in-law's home.

He asks her to learn from Akshara as she still works hard to maintain peace and harmony in her house.

After Manish leaves, Arohi gets angry and her eyes fill with tears while Neil sees her and hugs her.

Meanwhile, Arohi gives the lunch basket to Neil but he informs her about the chaos in the hospital due to the donor list.

In the Birla house, Akshara pulls Manjari to the temple and gives her a handmade thank card which contains her signing cheque.

Manjari gets happy seeing the cheque in her name and asks Akshara why she named her first cheque after her.

Akshara says only a mother is the reason for her children's success and fortune and bends to take Manjari’s blessing.

Suddenly, Abhimanyu's angry voice is heard and the cheque falls on the ground from Manjari's hand while Akshara and Manjari run towards the living room.

Abhimanyu asks Neil how he can take a critical decision himself but Neil reasons that Abhi was not available at that time so he took the decision.

Neil angrily exclaims that someone didn’t die so nothing serious happened and Abhi gets shocked at Neil’s ignorance.

Meanwhile, Harshvardhan defends Neil saying that Abhimanyu also took some decisions without asking him when the situation was dire.

Abhimanyu states that he doesn't have any problem with the idea of Neil taking the decision but he's angry because Neil gave it to the high profile case.

Anand bashes Neil for not following the hospital protocol and Abhi blames Neil for taking a rash decision because he is not a doctor himself.

Neil defends himself saying he asked Mahima and she gives excuses while Anand scolds her for not following the protocols.

Both brothers argue while Manjari screams at them to stop fighting like dogs and cats.

However, Arohi tries to butt in but Akshara tells her to not speak in between both brothers.

Neil states that he cannot come to Abhi every time a critical decision appears just because he is the real son.

Arohi accuses Abhi of taking personal revenge on them but he asks her to shut up and stop running her pea size brain.

Akshara tries to calm down Neil as she knows Arohi has filled Neil’s head with her bitter words.

However, Neil rudely asks Akshara not to speak between him and Abhi as he is talking to Abhimanyu not her.

In the end, Abhimanyu announces that only he will take the decisions regarding the Birla hospital and walks away.

Neil walks away angrily while Akshara taunts Arohi for putting a fire in between both brothers.

Later, Akshara enters the room while Abhimanyu is sitting gloomily.

He shows her the cheque and the thank you card and apologizes to her as they weren’t able to celebrate her achievement.

© Copyright tellybest.com, 2022, 2023. All Rights Reserved. Unauthorized use and/or duplication of any material from tellybest.com without written permission is strictly prohibited.
Cached Saved on: Wednesday 23rd of November 2022 11:20:39 PMCached Disp on: Saturday 10th of December 2022 02:43:39 PM