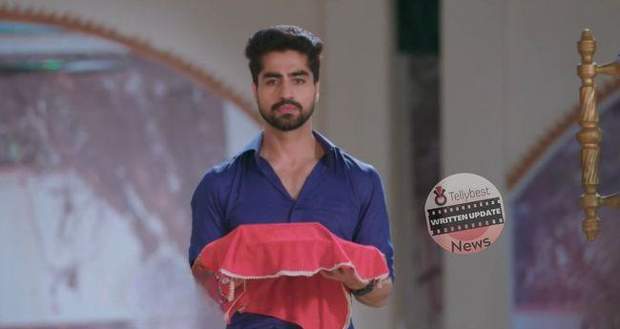 Meanwhile, Akshara asks him to support her in stopping the marriage between Aarohi and Neil because it is good for no one.

Abhimanyu promises to support her before disconnecting the call.

The next morning, Akshara is shocked to see Abhimanyu standing in her hallway with Shagun in his hand.

Akshara questions Abhimanyu about his promise for stopping Neil and Aarohi's marriage.

However, he tells her about his conversation with Neil where he expresses his undying love for Aarohi and accepts her as she is.

Abhimanyu tells Akshara that it is sufficient for him and he does not care whether Aarohi loves him or not.

Akshara tries to tell Abhimanyu to not give in to the emotional pressure because, in the long run, it will cause a lot of problems for Neil.

Meanwhile, Abhimanyu tells Akshara that she has done the same when she left him to save him without thinking about the consequences.

He also accepts that Akshara did what she felt was right and the right to make the decision should be given to the person experiencing the problem.

However, Akshara tells him that she cannot stand aside and watch Neil destroy his life.

Just then Manjari comes in and tells Akshara that people who do not know how to look after their own relationships should not interfere in other people's lives.

Later, as the whole family gathers around them, Manjari tells Suhasini that she has come with a proposal for Aarohi and requests them to consider it for the sake of the children’s happiness.

However, Manish rejects the proposal politely while Aarohi objects.

Abhimanyu requests Manish to consider Neil as he loves Aarohi a lot.

Manish tells him that he is not ready to put another daughter through the same pain and turmoil.

However, Manjari tells Manish that for the relations to get bitter, both families are equally responsible and both families have suffered.

She asks that they can set those things aside and can have a new beginning for Aarohi and Neil who both love each other.

As Manjari begins to leave Swarna comes in the way and tells Manjari that she is ready to accept the proposal for the sake of her daughter's happiness.

Manish objects to Swarna’s decision but Swarna tells him that a mother fights for her daughter’s happiness and that she will go tomorrow to Birla's house for Tilak.

Aarohi becomes happy at Swarna’s support while Akshara looks at her in shock.

Meanwhile, Mahima expresses concern to Anand at once again tying the relationship with Goenkas.

However, Anand tells her to keep him out of it as he does not care about all this.

Later, Akshara tries to convince Swarna about Aarohi’s selfishness and that she does not love Neil.

However, Swarna tells her to not judge Aarohi’s love just because she is bitter about the concept of love.