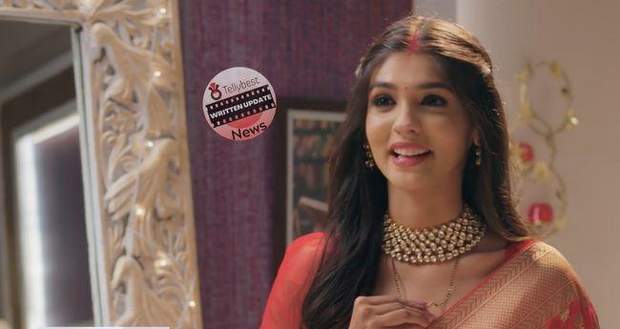 Today's Yeh Rishta Kya Kehlata Hai (YRKKH) 23rd September 2022 episode starts with Abhimanyu announcing to the press about Kairav being a fugitive who is running from the law after killing his sister.

Akshara tries to stop him from spewing the lies saying he is wrong but Abhimanyu refuses to believe her and calls the police.

Kairav gets scared and tries to run away but the police capture him and also arrested Manish for aiding and abetting Kairav.

Meanwhile, Abhimanyu arrives at home telling Mahima that he has fulfilled his promise to her and Anisha got her justice.

Later, Akshara arrives at the Birla house and asks Abhimanyu for putting Kairav wrongfully in jail and for not talking to her when she had left the proof with him.

Abhimanyu looks surprised at the mention of proof while Mahima tells Akshara to not spin lies as Abhimanyu will not come into it.

Seeing Abhimanyu walk away, Akshara tells him that she will not let his family go to jail because of his anger and lack of trust.

After a while, Abhimanyu asks Parth to stop the car and goes to check his room for said evidence and finds it empty.

Meanwhile, Parth asks Mahima to think again about what she has done with the evidence.

Apparently, Mahima has removed the evidence from Abhimanyu's room to get Kairav arrested despite seeing the proof and Parth knows about it and is emotionally blackmailed into silence.

At the Goenka house, everyone asks Akshara about the evidence she was talking about while Akshara tells them that she has left evidence with Abhimanyu and has not made a copy of it and now she has nothing.

Aarohi gets angry at Akshara for being casual about it and accuses her of killing her mother because of it too.

Meanwhile, Abhimanyu is sitting with Manjari feeling sad at the decision he is forced to take.

At the hospital, Anand is thankful for getting justice for Anisha while Harshvardhan asks Anand to stop taking alcohol in coffee.

After a while, Abhimanyu comes to tell them about Manish's arrest and that they should clear the matter with the police.

However, Mahima tells Abhimanyu to not bother with this matter as they deserve to go to jail and they should be thankful that Akshara is out.

Abhimanyu goes away, sad to think that Akshara has betrayed his trust and that there was no evidence in the room else he would have found it.

Meanwhile, Akshara talks to herself and asks Abhimanyu to punish her instead of Kairav and Manish who are innocent for which she has given her proof.

Akshara wants Abhimanyu to become who he was before and not this changed version who can not see the truth that is in front of him.