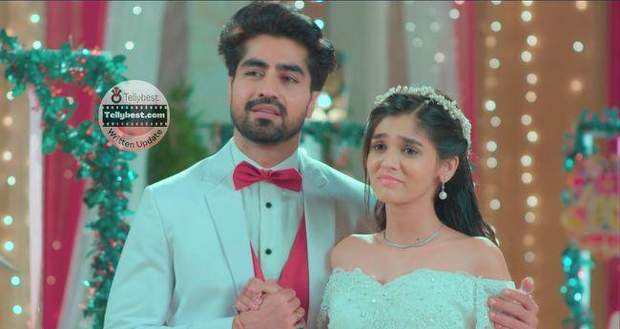 Today's Yeh Rishta Kya Kehlata Hai (YRKKH) 24th December 2022 episode starts with Manjari hearing Akshara talking to the concert girl on the phone and tells Akshara that she is going to the temple with Aarohi.

She also asks her to look after herself as only Shivu and Shefali are home.

Meanwhile, Abhimanyu is sending a message to Akshara about going into surgery when he smiles to see a message for Neil.

At home, Akshara is doubling in pain while Shefali comes to her to comfort her and to take her to the hospital.

However, Akshara’s pain is severe and Shefali cannot handle her alone.

Just then Neil comes there as well and takes Akshara to another hospital as there is a huge jam at Birla hospital.

Afterwards, Akshara's cramps subsided after getting the medical attention and she feels happy that everything is fine.

On their way back, Akshara gets a call from the NGO girls who are being kidnapped from the concert menu.

Neil calls the police telling Akshara that they will soon get to the goons.

However, Akshara feels responsible and tells him that she will have to go to them and keep them occupied until the police arrive.

Neil agrees to go with her and gets tangled in a fight while locking Akshara in the car.

Seeing Neil being overpowered, Akshara decides to interfere and drive over the goons when they attempt to kill him.

Meanwhile, Manjari is shocked to hear that Akshara has gone out.

On being explained, Manajri's worry increases and she asks Aarohi to call Neil and find out.

However, Manjari’s worry turns to anger when she hears about Akshara going to a concert.

After the surgery, Abhimanyu is surprised to see Neil and Akshara’s missed calls.

Just then, the patient's brother thanks Abhimanyu for saving his brother's life and asks him what he can do for him.

Meanwhile, the goons hit Neil on the head making him fall down.

Akshara is shocked to see that while the goons zero in on her to capture her with other girls as well.

Akshara fears for the safety of their children and requests them to leave her alone.

Just as the goon is about to hit Akshara, the police arrive in time and shoot at the goon.

Later, Akshara goes to Neil trying to wake him up.

Meanwhile, Abhimanyu thinks of Neil and dials his number.

© Copyright tellybest.com, 2022, 2023. All Rights Reserved. Unauthorized use and/or duplication of any material from tellybest.com without written permission is strictly prohibited.
Cached Saved on: Wednesday 25th of January 2023 01:42:40 PMCached Disp on: Tuesday 31st of January 2023 06:54:19 PM