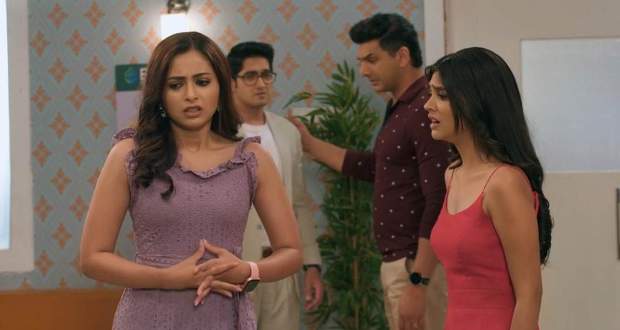 Today's Yeh Rishta Kya Kehlata Hai (YRKKH) 24th February 2022 episode starts with Abhimanyu proposing about both his and Akshara’s rejoining at the Birla hospital and Harshvardhan agreeing to it.

As Akshara and Kairav discuss Manish’s condition, Dadi, Swarna, and Vansh arrive there and comfort them.

Seeing Akshara being loved and hugged by Swarna, Anisha gets upset about Mahima not caring about her like other mothers.

Akshara comes to talk with Anisha and suggests she talks with Mahima as no mother can remain angry with their children for their whole life.

Afterward, Akshara visits Manish’s room where Abhimanyu asks her to enter so that she can see Manish.

After taking the stethoscope from Abhimanyu, Akshara elates in happiness as she feels the heartbeat of Manish.

Abhimanyu compliments Akshara for her singing that helped in reviving Manish during the operation and asks her to rejoin Birla Hospital.

Akshara and Abhimanyu talk about rejoining when Manish wakes up from his unconsciousness making them sigh in relief.

As Abhimanyu was about to check him, Manish smacks him aside but gives in after Abhimanyu gives a strict scolding to him.

Meanwhile, Anisha tries to convince Mahima to forgive her but fails in doing so.

After a while, the whole family meets with Manish and laughs together as Manish tells them about their importance in his life.

He asks to talk with Dadi and Swarna alone and tells them that he wants to correct everything in his children’s lives.

Later, Akshara and Abhimanyu recall that day’s events while sitting together under the night sky.

However, Akshara tells Abhimanyu if something happened to Manish earlier, she would not be able to forgive herself.

Without realizing it, Akshara continues to say that she never understood how her love for Abhimanyu has become a fatal wound to her family.

She says that she never wanted a love that would hurt her family to this extent.

Hearing Akshara’s regretful words for their love, tears slip out of Abhimanyu’s eyes as he feels hurt and betrayed.