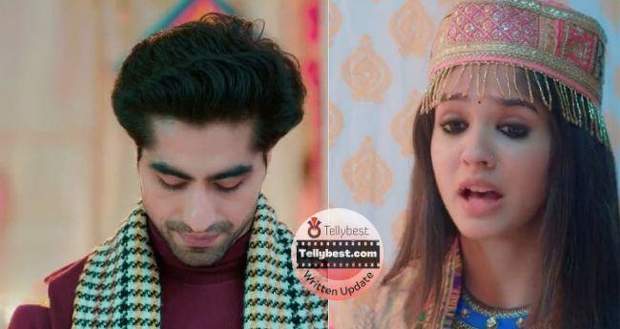 Today's Yeh Rishta Kya Kehlata Hai (YRKKH) 24th January 2023 episode starts with Akshara reminding the lyrics of the song to Neelam amma but she does not recall the melody of the song and asks Akshara about it.

Meanwhile, Manjari is talking to Neil’s photo and asking him if he will support her in her decision to bring happiness to Abhimanyu’s life.

Later, Manjari calls Abhimanyu and tells her that she can sense happiness and sorrow in his voice.

Abhimanyu smiles painfully while Manjari tells him to come back home soon.

Later, Muskaan asks Akshara to sing the song if she knows the lyrics but Abhinav and Abheer tell Muskaan that Akshara cannot sing and goes into silent mode when she is asked to sing.

Meanwhile, Abhimanyu recalls all the moments when he felt in the magical world after hearing her singing.

In the meantime, Akshara tells Neelam amma to sing while she goes dancing with other women.

Abhinav also joins them but is mocked for his funny moves.

Abhimanyu tries to guide Abhinav from afar when Muskaan drags him with her.

Later, Abhimanyu guides Abhinav in dancing while Akshara feels awkward at Abhimanyu’s presence in the dancing.

After a while, Abhinav is taking coffee for Akshara with a heart drawn on its surface when the power is cut off and his plan is ruined.

Neelam Amma also worries about the light when she is about to put "Nath" (nose ring) on the bride.

Akshara and Abhimanyu go to find the reason for the power cut and find two people stealing the light.

Akshara goes to get something to beat them but later, spots Abhimanyu there and stops imagining the thieves being beaten.

However, Akshara gets shocked to see Abhimanyu calmly talking to the thieves who make fun of him and threaten to break his bones.

Akshara marches on them and beats them with the rod for stealing the light while Abhimanyu looks at Akshara’s violent side in shock.

Later, Akshara helps Abhimanyu fix the fuSe while their heart silently communicates with each other about the changes in their attitude and behavior.

Meanwhile, Mahima scolds Parth for being irresponsible and forgetting the file which he has left at home while Shefali comes running with the file.

Elsewhere, Muskan asks Akshara bout her nose ring while Abhinav brings it and admires Akshara while she adorns it.

Later, Akshara and Abhimanyu watch the rituals of the marriage and recall their own wedding.

Abhimanyu looks puzzled at first and later realizes with relief that he means “Exotic”.

In the meantime, Parth drops Shefali on the road for talking back to him and being late in getting the file.

Just then, Mahima who was coming the same way stops the car and asks Shefali to get in.

However, Shefali is feeling humiliated and tells Mahima that her threshold of tolerating Parth's antics is coming close and she will now do as she pleases.

On being scolded, Shefali tells Mahima to go and teach her son to behave instead of her who is standing in the middle of the road because of him.

In the meantime, Abhinav is serving food to Abhimanyu when Akshara spots them together and runs towards them seeing Abhimanyu eating sweet potatoes.

Abhinav questions Akshara for being overcautious while Akshara tells him that mountain sweet potatoes do not suit everyone as one of his passengers suffered last time due to it.

Abhimanyu also tells Abhinav that he is allergic to sweet potatoes and it can be quite fatal for him.

Abhinav praises Akshara for her farsightedness and tells Abhinav to leave the plate and that he will prepare another for him.