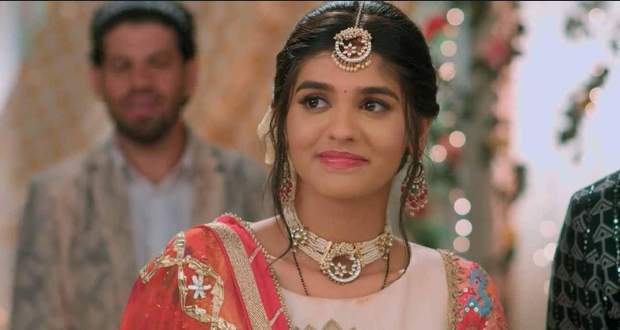 Today's Yeh Rishta Kya Kehlata Hai (YRKKH) 24th June 2022 episode starts with Suhasini telling everyone that the first year of marriage is crucial and if it gets cleared then the bond becomes strong.

Manjari also agrees with Suhasini telling everyone that sometimes people do not give enough time to their relationship and immerse themselves in work therefore both husband and wife should hold the rope of the relationship tightly.

Abhimanyu tells Suhasini that there is no need to worry about them as everything is ok between him and Akshara.

Suhasini gives them pearls and tells them to always hold their hands together.

After a while, Abhimanyu asks Akshara what she wants to do next while Akshara asks him what he wants.

They begin to argue once again but Parth interrupts them.

Akshara tells them that Abhimanyu is telling her to stay another day because of Suhasini.

Meanwhile, Akshara’s recorded voice is heard from the speaker which she has recorded for Abhimanyu a long time back.

Akshara is also thinking of Abhimanyu.

On the other hand, Abhimanyu tells Manjari that she has never been happy in her life despite her sacrifice and that it affects him and his relationship with Akshara.

Abhimanyu tells her that she should have divorced Harshvardhan instead of forgiving him.

Manjari becomes afraid and says that her relationship should not affect Abhimanyu’s relationship.

On the other hand, Mahima tells Anand that Parth will replace Harshvardhan at the hospital instead of Abhimanyu and it will be Abhimanyu who will make it happen.

After a while, Abhimanyu tells the Goenkas that everything is fine for now.

Abhimanyu asks Akshara if Suhasini knows about their fight and that her precious pearls have failed to harmonize their relationship.

Abhimanyu tells Akshara that there is no need to pretend as it is torturous for him.

Meanwhile, Manjari contemplates Abhimanyu’s words and gets hit by the table that wakes Harshvardhan.

Harshvardhan barks at her again which reminds her of Akshara and Abhimnayu’s words about having respect and love in a relationship and she makes a decision.

Later, Suhasini is coming back to consciousness praying for Akshara and Abhimanyu.

Akshara feels responsible for Suhasini’s condition and escapes the room.

© Copyright tellybest.com, 2022, 2023. All Rights Reserved. Unauthorized use and/or duplication of any material from tellybest.com without written permission is strictly prohibited.
Cached Saved on: Monday 21st of November 2022 08:31:25 AMCached Disp on: Monday 5th of December 2022 02:33:40 PM