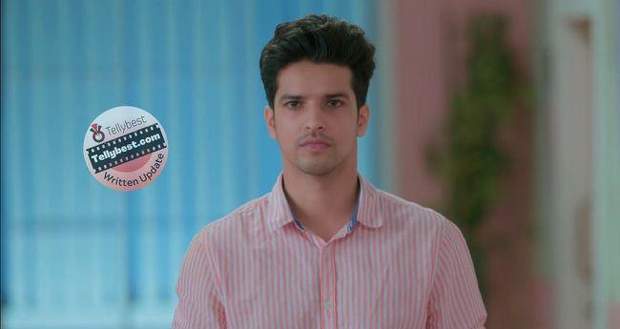 At the same time, Akshara gets a call from the music director but she ignores it as she thinks Abhimanyu needs her more.

However, Abhimanyu decides to go with Akshara and enjoy her photoshoot.

He exclaims he wants to see Akshara’s red cheeks and her cute smile while Akshara hugs Abhimanyu.

Later, Abhimanyu gets a message from Dr Iyer that Akshu’s case has hope.

Abhimanyu leaves Akshu’s side and calls the doctor excitedly but leaves the file on the table.

Meanwhile, Arohi is watching Abhimanyu suspiciously while he leaves the room.

Arohi enters the room to check the file but she hears footsteps and puts the file back.

She hides behind the couch while Abhimanyu decides to take the file with him.

When Abhimanyu leaves, Arohi is sure that he is hiding something about Akshara or the donor list.

In the studio, Abhimanyu admires Akshara while she is giving different poses with the mike.

He helps her in fixing her makeup and the cameraman offers him the camera.

Embarrassed Abhimanyu refuses but the cameraman insists as Akshara’s happiness reflects on her face if she's with him.

In Manjari’s room, Manjari lies on the bed sick and Neil blames himself and Arohi for creating problems in her life.

When Neil is leaving the room he meets Akshara at the door, she tries to talk to him but he walks away.

Akshara enters the room and asks Manjari about her health.

However, Manjari tells Akshara about Shivu’s birthday and Akshara assures her that she and Abhi will make all the preparations.

The next morning, Abhimanyu picks up Shivu while the family members are assigning the work to everyone.

In the Goenka house, the clients cancel the deal and blame Kairav for being late in the delivery of the goods.

However, Vansh tries to defend Kairav but Manish stops him as Kairav needs to stand up for himself.

Akshara taunts Arohi as she never showed interest in these things before but Mahima supports Arohi so Akshara backs down.

Meanwhile, Kairav starts to walk away but stops when he recalls Akshara’s words of encouragement.

He wipes the sweat on his forehead and closes his eyes for a moment and walks back.

Everyone looks at Kairav, shocked and happy when he takes a stand in front of the clients.

Swarna and Manish praise Kairav for defeating his fear successfully.

In the Birla house, the house is buzzing with excitement while everyone does their share of the work.

However, everyone praises Akshara for her efforts and Arohi feels jealous and left out.

Arohi calls her friend to find out about Dr Iyer as she needs to know what Abhimanyu is hiding.

© Copyright tellybest.com, 2022, 2023. All Rights Reserved. Unauthorized use and/or duplication of any material from tellybest.com without written permission is strictly prohibited.
Cached Saved on: Thursday 24th of November 2022 11:36:28 PMCached Disp on: Thursday 1st of December 2022 01:39:22 AM