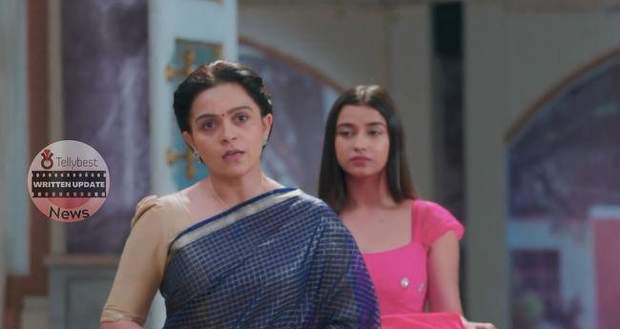 Later, Aarohi mocks Akshara for losing to her while Akshara tells her that it is not about winning but right and wrong.

Meanwhile, Abhimanyu tells the good news to Neil about his marriage while Neil hugs him with joy.

However, Abhimanyu hopes that all of Akshara’s doubts prove wrong and Neil and his love win.

Elsewhere, Manish is feeling depressed at the events of his family while Suhasini tells him to accept things as God’s will.

Anand questions Manjari for taking such a big decision without even consulting them.

Manjari tells them that some decisions are so difficult that it needs to be taken alone and instantly.

Manjari also informs them of the Tilak that is tomorrow and requests them to attend it looking happy for Neil’s sake.

However, Anand expresses his unhappiness at the decision and walks out from there.

Later, Abhimanyu comes to Manjari and putting his head on her lap he tells her that he is trying very hard to set things right and improve his relationship with his family.

Meanwhile, Manjari tells him that he should have made similar efforts to improve his relationship with Akshara and should have put himself first for once.

Elsewhere, Neil and Aarohi are talking to each other expressing their happiness with their family and giving their blessings for their relationship.

Later, Aarohi cleverly takes his promise from Neil to never leave his house and family in anger.

Afterwards, Neil tells Aarohi never to repeat her threat of suicide ever again.

On the other hand, Akshara confronts Abhimanyu and questions him for not trusting her and why.

She also tells him that their relationship falls apart because of the lack of trust.

However, Abhimanyu questions Akshara for forcing him to distrust her and breaking his trust.

Meanwhile, Aarohi is admiring Nyra’s dress and decides to alter it but neither Akshara nor Swarna agrees on it and tells her to wear it as it is or else wear something else.

Later, Abhimanyu is at the boutique purchasing something when he hears Aarohi talking about altering a dress.

Recognising the dress to be Akshara’s favourite and knowing that it is useless to talk sense into Aarohi, Abhimanyu steals the dress and goes away.

After a while, Aarohi gets angry to see the dress gone and is forced to buy a new one.

Meanwhile, Abhimanyu sends the dress to Akshara with a note acknowledging her love for her mother and her connection with the dress which makes Akshara grateful to him.

Later, Swarna admires Aarohi’s dress and appreciates her decision for not to alter Nayra's dress.

Just then Aarohi gets a call from her lawyer and she rushes to the privacy of her room to discuss the prenuptial contract that she has gotten prepared.

Akshara overhears it and decides to find out about the papers that Aarohi is talking about.

© Copyright tellybest.com, 2022, 2023. All Rights Reserved. Unauthorized use and/or duplication of any material from tellybest.com without written permission is strictly prohibited.
Cached Saved on: Monday 21st of November 2022 05:58:29 AMCached Disp on: Thursday 1st of December 2022 02:45:57 AM