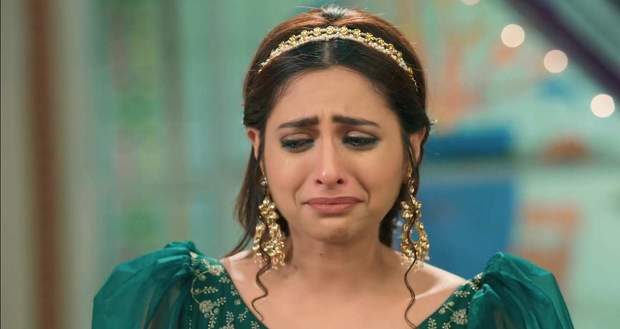 Abhimanyu feels guilty about seeing this and reapplies the Mehndi on Akshara’s hand.

Later, dancing and singing continue in the Goenka house while Aarohi watches.

Abhimanyu and Akshara are engrossed in each other and enjoy the celebrations while Abhimanyu looks after Akshara and her Mehndi laden hands.

Aarohi who is watching everything from above sees a chandelier getting loose and rushes to save Akshara who is standing right under it.

Just then Abhimanyu also spots the chandelier being loose and rushes towards Akshara but Aarohi reaches in time and pushes Akshara in time but gets hurt herself.

Everyone is shocked at this new problem and rushes to Aarohi.

Akshara also hugs Aarohi and scolds her for putting her life at risk.

Abhimanyu does not like Akshara giving attention to Aarohi but remains silent and also checks Aarohi’s bruise.

After a while, Abhimanyu asks Manjari to leave as everyone is tired and is in need of rest for the next day.

Dadi once again apologises to Abhimanyu and thanks him for taking care of the matter.

Before leaving, Abhimanyu asks after Akshara. He tells her emotively that he cannot see her hurt as his heart stops working when something happens to her.

Akshara tries to convince Abhimanyu about Aarohi but he cut short the talk and instructs Akshara to rest and be cheerful.

Akshara kisses Abhimanyu and expresses her love to him before he leaves.

Later, Neil comes to Abhimanyu while he is preparing for the next day and tells him that despite everything there is a little sadness in him and Akshara and leaves him with his thoughts.