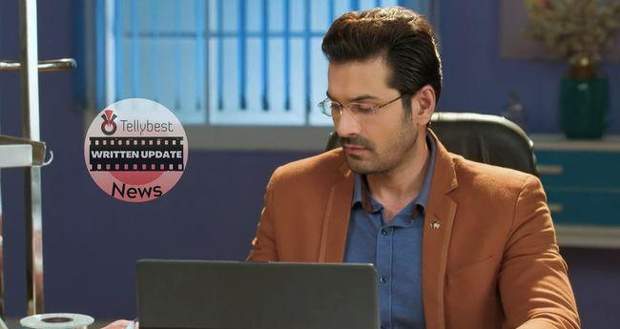 Later, Akshara wanders on the street of Mauritius and thinks about Abhimanyu and writes a letter about her life over the past year.

Arriving at the mountain top, Akshara takes out the letters and spread them in the air wishing Abhimanyu a first goodbye anniversary and crying her heart out for Abhimanyu.

Meanwhile, Abhimanyu is in the Iron Man competition as one of the final three finalists.

On being asked about his success Mantra, Abhimanyu tells them that when the heart is filled with the memories of some beloved then the willpower comes from within and that's how one becomes a winner.

Chopping the wooden block in the final round, Abhimanyu remember the day of his operation when Abhimanyu was given the news of Akshara's elopement and her betrayal for choosing her family over him.

It takes no time and the huge block of wood fell on the floor into parts.

On the other hand, Maaya is afraid of singing in front of a crowd while Akshara encourages her by saying that only those people fear who are alive and who care.

Just then Dr Kunal arrives bringing ice cream for Maaya who rejoices in the fact that she can eat all the ice cream in the world and still become a famous music sensation.

Akshara gives a cold shoulder to Dr Kunal while Maaya informs Akshara that her song will be played in India at one of the competitions and she has a link where she can see it being played.

Akshara becomes afraid and prays that Abhimanyu does not listen to her song.

Meanwhile, Abhimanyu is pulling a jeep with a rope while his headphone makes a loud noise.

Abhimanyu recalls the days after Akshara’s departure when he could have hired a detective to find Akshara but her leaving without explanation has demotivated him from searching for her.

He also remembers the time when he first performed his surgery after his recovery and has learned to shut Akshara’s voice by listening to noise.

In the meantime, Maaya is trying to connect the link to see her song being played.

Elsewhere, the host of Abhimanyu's competition is announcing to play the song of fresh talented singers.

Meanwhile, Maaya and Kunal are surprised to see an Iron Man competition going on, where her song will be played.

Maaya turns Akshara’s and Dr Kunal’s faces from the TV to take a selfie just when Abhimanyu’s face is shown on it as one of the contestants.