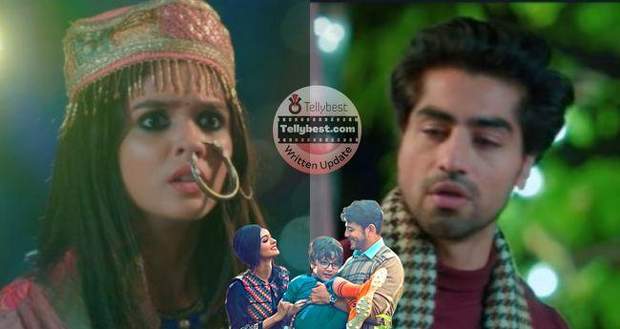 She blames God for this situation and tells God to not do this to her as she has not been able to come out of the past completely and will not be able to bear the repetition of the story.

The past few days revolve around Akshara’s eyes and her panic attack takes over.

Just then Abhimanyu comes there trying to help her get over the panic attack.

He tells her to sing to mellow her panic attack but Akshara could not sing.

Abhimanyu feels helpless and tells her to sit tight and that he will go and get water for her.

As he is returning with the bottle of water, he hears Abheer playing Mouthorgan to Akshara and her panic subsides.

Abhimanyu feels relieved and wipes his tears seeing mother and son together.

He takes his steps back while Akshara looks at his receding steps.

Later, Akshara tells Abheer to not mention her attack to Abhinav else he will get worried.

Meanwhile, Manjari asks Parth about Shefali who is not with him.

Just then Mahima comes there and makes an excuse about Shefali having some work.

Later, Mahima berates Parth for his rude behaviour towards Shefali and tells him that she will not tolerate any spot on her reputation be it at home or the hospital.

Meanwhile, Muskaan asks Abhinav to share his love story with them.

Abhinav tells her that there is no love story while Muskaan tells her to create one and use this opportunity to express her love for Akshara.

Meanwhile, Abhimanyu who has accompanied Abhinav feels uncomfortable but is forced to sit and hear the torturous details without knowing that it is all fabrication.

Later, Abhinav opens his heart and becomes vulnerable while confessing his feelings for Akshara.

His humorous lies entertain everyone but Akshara feels uncomfortable.

Later, Abhinav describes his feeling about Abheer’s arrival in his life while Abhimanyu recalls his painful memories of losing their children and Akshara with them.

Abhimanyu quietly walks out from there while Akshara also leaves to excuse her about Abheer.

Later, Neelam Amma tells Akshara about Muskaan and her ambition to go out of town to study.

Akshara assures her that she and Abhinav will go with Muskaan to settle her.

After a while, Neelam Amma asks Akshara to turn Abhinav’s love story into reality.

Meanwhile, Abhimanyu suffers the same panic at the thought of Akshara loving someone else.

He vows to move on too so that he does not feel the intense pain.

Meanwhile, Muskaan apologises to Abhinav for forcing him to fabricate a love story and not getting the desired result.

Abhinav is worried that Akshara might not have understood his feelings.

Muskaan tells him to make Akshara understand his love whereas Abhinav tells her that there is no reality in this love story as far as Akshara is concerned and it is very much possible that it will never be.

Just then Abhimanyu who is passing by overhears Abhinav.

© Copyright tellybest.com, 2022, 2023. All Rights Reserved. Unauthorized use and/or duplication of any material from tellybest.com without written permission is strictly prohibited.
Cached Saved on: Wednesday 25th of January 2023 11:56:39 PMCached Disp on: Wednesday 1st of February 2023 06:02:02 PM