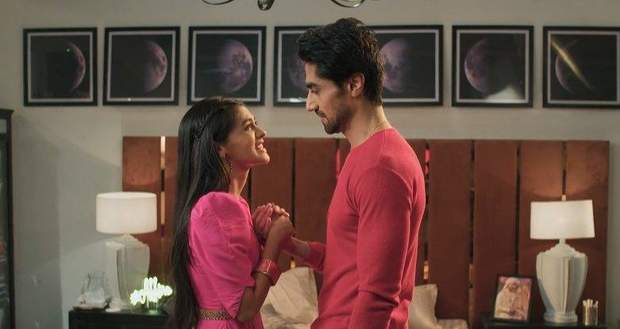 Akshara tells him that soon he will be well enough to do surgeries and kisses him.

Realising he has an overgrown beard she shaves it.

Meanwhile, Harshvardhan calls Manjari to enquire about Abhimanyu and tells Manjari that soon they will find a cure for Abhimanyu. Manjari also tells him that she is optimistic and has full faith in her God.

After a while, Akshara comes to Anand asking about any progress he might have about made regarding Abhimanyu’s cure and whether she can apply home remedies to strengthen his nerve.

Anand tells her that they are looking into all options other than surgery as it's too risky and she can apply anything she is sure about. He also tells her that strong willpower and positive thinking will help in healing the body faster.

On the other hand, Harshvardhan arrives at the hospital feeling grateful to Abhimanyu for giving back his post.

Anand and his staff welcome Harshvardhan and tell him to take back his cabin and responsibilities.

Later, Harshvardhan is absorbing being back in the office while Neil clicks Harshvardhan’s pic and sends it to Abhimanyu who feels relieved to see Harshvardhan back at his post and decides to focus on getting better.

Meanwhile, Harshvardhan comes to Anand's room at lunchtime and joins them at Anand's insistence.

On the other hand, Akshara tells Abhimanyu that she has prepared everything for him and that his physiotherapist will be here soon.

Akshara acts jealous and tells Abhimanyu that he will enjoy having a young and promising physiotherapist at his beck and call.

However, Shashi turns out to be a male therapist making Abhimanyu mock Akshara’s jealousy.

After a while, Aarohi arrives at Birla's house under the pretext of conferring with Abhimanyu about colleges for further studies and tries to instigate him against Akshara by invoking jealousy in him.

Later, Shashi saves Akshara from falling instead of Abhimanyu which Aarohi uses to oil the fire.

However, Abhimanyu spoils Aarohi’s plan by acting cool and thanking Shashi for saving Akshara and talking to her about music.

After a while, Akshara serves a bottle gourd to Abhimanyu which he dislikes a lot.

However, Akshara insists while Neil and Parth mock Abhimanyu for eating a bottle gourd for Akshara.

Aarohi observes their love exchange while Abhimanyu is grateful to have Akshara as his life partner.

© Copyright tellybest.com, 2022, 2023. All Rights Reserved. Unauthorized use and/or duplication of any material from tellybest.com without written permission is strictly prohibited.
Cached Saved on: Thursday 26th of January 2023 08:20:23 AMCached Disp on: Thursday 9th of February 2023 09:06:22 AM