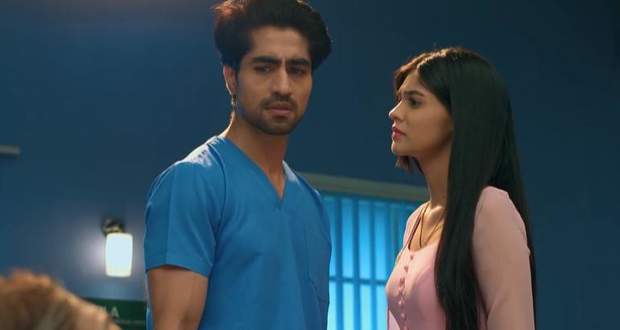 Today's Yeh Rishta Kya Kehlata Hai (YRKKH) 25th June 2022 episode starts with Abhimanyu telling Akshara to have a coffee break as Suhasini is asleep and a nurse is with her.

Abhimanyu and Akshara begin to have a cute fight over coffee when another doctor intervenes and gives them fresh cups.

Just then Abhimanyu and Akshara hear a child cry and go to investigate.

Later, a board of directors who have observed Akshara singing praises her and tells Abhimanyu to consider Akshara for Harshvardhan’s post.

Mahima tells Anand to take some quick action or there will be no place for them in the hospital.

In the meantime, Harshvardhan comes to Manjari asking her to give him water and medicine.

Manjari rudely tells him about the medicine and asks the staff to get water for Harshvardhan.

Abhimanyu comforts Akshara and later they fall asleep together waiting on Suhasini.

The next morning, Suhasini wakes up to find Abhimanyu and Akshara asleep and Kairav, Manish, Akhilesh and Aarohi smiling at them.

Later, Abhimanyu and Akshara wake up with the phone bell and feel embarrassed.

Akshara asks Suhasini about her health while Suhasini tells Abhimanyu to discharge her.

Aarohi enquires about Akshara's plan to go to Goenka’s house or Birla’s house.

Akshara ignores her question while Aarohi decides to tell Kairav about AbhiRA's fight.

After a while, Akshara contemplates taking coffee to Abhimanyu while Aarohi instigates Kairav by faking concern for Akshara.

Akshara is immersed in her thoughts when Kairav confronts her about having issues with Abhimanyu.

Akshara denies Kairav's claim, saying everything is alright between her and Abhimanyu and she is only worried about Suhasini.

On Kairav's insistence, Akshara couldn’t hold her tears and begins to cry but still denies having any problems with Abhimanyu.

Just then Kairav sees Abhimanyu and asks him what has he done to Akshara.

Akshara is shocked to see Abhimanyu while Kairav goes to stand against him repeating his question.