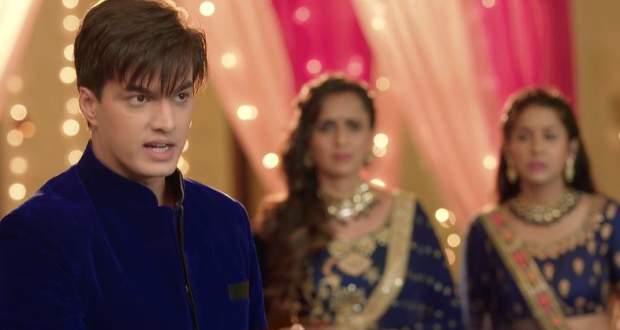 Ranvir sternly warns Narendranath to stay away from Sirat which makes him feel insulted.

Later, Kartik plans to meet Narendranath and convinces him of Ranvir and Sirat's marriage.

Ranvir requests Kartik that he will accompany him but he refuses as he thinks Ranvir's presence might create trouble for them.

On the other hand, Narendranath gets furious thinking about Ranvir and Sirat and vows to destroy their life.

Further, Kartik and Manish make an attempt to request Narendranath for accepting Ranvir and Sirat's marriage but it fails.

Narendranath keeps on abusing Sirat and her background which makes Kartik lose his temper and he answers him back harshly.

Narendranath insults Kartik and Manish and tells them that he won't let them be successful in getting Ranvir and Sirat married.

Later, Kartik suggests Ranvir and Sirat get married in the daytime as if Narendranath plans to bring hurdles in the marriage he will plan them as per the evening time.

© Copyright tellybest.com, 2020, 2021. All Rights Reserved. Unauthorized use and/or duplication of any material from tellybest.com without written permission is strictly prohibited.
Cached Saved on: Tuesday 8th of June 2021 06:23:47 PMCached Disp on: Wednesday 16th of June 2021 12:51:09 AM